COVID-19: Boris Johnson to meet with 1922 Committee of Conservative MPs after warning Cabinet of a ‘huge spike’ of Omicron cases 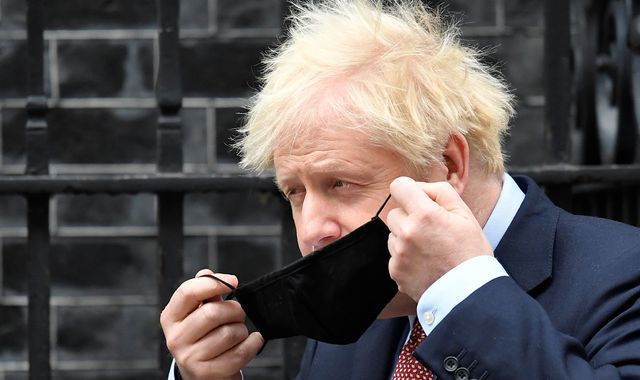 Prime Minister Boris Johnson is to meet with the 1922 Committee of Conservative backbench MPs as pressure mounts ahead of crunch votes on Plan B coronavirus restrictions.

Sky News understands that Mr Johnson will hold a “special meeting” with the committee at 5.30pm, an hour before MPs are due to vote on regulations.

Plan B includes masks in most indoor places, the work from home mandate, vaccine passports for large events, and compulsory vaccinations for NHS frontline staff.

Reiterating the need for the measures, the prime minister told Cabinet on Tuesday that a “huge spike” of COVID cases is on the way.

Opening the Commons debate on the new restrictions, Sajid Javid said there is a “very real risk” that rising Omicron cases could “threaten to overwhelm the NHS”.

The health secretary said he is “confident that these measures are balanced and proportionate measures” and that ministers “won’t keep them in place a day longer than we have to”.

Warning MPs that “Omicron is a grave threat” and that there is “really no time to lose”, Mr Javid said the measures will be reviewed by 5 January and will “sunset” by 26 January.

But some Conservative MPs criticised the government’s proposed measures to combat the virus.

Andrew Bridgen highlighted comments from the head of the South African Medical Association suggesting Omicron is a “mild form of COVID-19” and will have “huge benefits for herd immunity and protection”.

“We have had a problem with inaccurate forecasts. Will he accept that point?”

Mr Javid said, “I absolutely accept that point”, adding: “Just because forecasts in the past have been wrong, it doesn’t mean to say every estimate or forecast is always wrong.”

Responding to the backlash of some about the mandatory use of COVID passes for some events, Mr Javid tried to appease MPs by giving the assurance that negative lateral flow tests will always be accepted as an alternative.

Conservative MP Alexander Stafford asked for confirmation that “lateral flow tests will always be used so everyone can access to all parts of our society”.

Mr Javid replied: “I can give my honourable friend that confirmation… I think it is absolutely vital there is always an option for lateral flow tests, and I would not support a vaccine-only option.”

But he reiterated the intention for booster jabs to be required instead of two doses as part of the COVID pass entry criteria for certain events and venues – adding that this will only happen once “all adults have had a reasonable chance” to get one.

He said they have been used in other parts of the country, in Scotland and Wales, and asked what difference it has made to transmission of Omicron there.

The health secretary reiterated that it is “not a vaccine passport”, adding that it is an attempt to reduce risks in “high risk” venues.

“I firmly believe that getting vaccinated is something that should be a positive decision and I can assure the House that the government has no intention of extending the condition of deployment to any other workforces or introducing mandatory vaccination more widely,” he said.

Numerous Conservative MPs asked for assurances that more restrictions will not be introduced during the Christmas recess.

“Even if the government wanted to do something different and change this in some way, of course it would have to come back to this House and seek the House’s approval,” Mr Javid told the Commons.

Asked by Conservative former chief whip Mark Harper if MPs could be recalled over Christmas to discuss any new “further measures”, Mr Javid said he is “not able to give that commitment” but that the government will “consider seriously” the proposal.

Shadow health secretary Wes Streeting said Labour will “act in the national interest” by supporting the motions under consideration in the Commons.