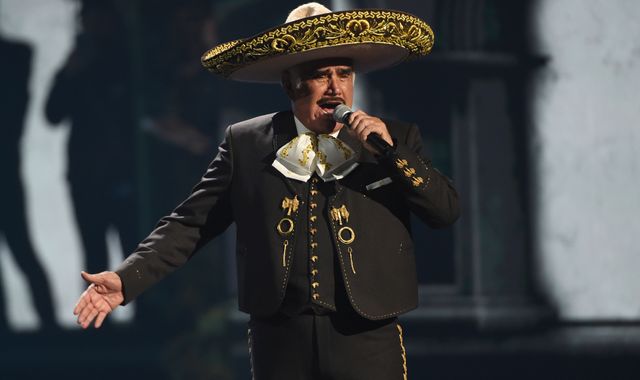 Thousands of people have gathered to pay tribute to Mexican singer Vicente Fernandez, who has died at the age of 81.

With tears and mariachi music, fans congregated into Arena VFG in Jalisco, Mexico, to pay their respects to the iconic ranchera music star.

Fernandez’s closed casket was placed beside the stage, surrounded by white flowers and the image of Mexico’s patron saint Our Lady of Guadalupe.

The three-time Grammy and nine-time Latin Grammy winner died on Sunday, the same day the country celebrated the saint.

He had been suffering medical complications after a fall at his home that injured his cervical spine and required an operation.

His family said on his official Instagram account: "It was an honour and a great pride to share with everyone a great musical career and give everything for the audience.

In 2016, he retired from the stage with a final concert of nearly 50 songs at Mexico City’s Azteca stadium.

Singer and rapper Pitbull paid tribute to Fernandez, saying: "The legend of all legends. You will be missed but never forgotten."

The chief executive of The Recording Academy, which organises the Grammys, also paid his respects, saying he was lucky to see the star perform live on several occasions and his death is an enormous loss.

"It’s a sad, sad moment for sure. But he’s left a great, great legacy of incredible music."