E-scooters banned from all London public transport over fire fears 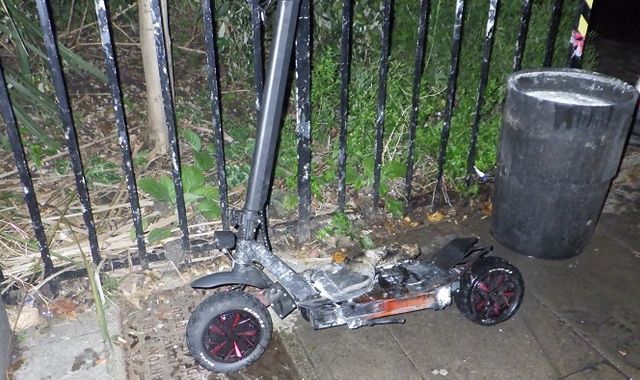 E-scooters have been banned from all public transport in London from today.

It comes amid fire safety concerns after one e-scooter caught fire on a Tube train.

The ban includes all e-scooters and e-unicycles, but does not include mobility scooters that are permitted on the network or foldable e-bikes.

It applies to all TfL services, including the Tube, buses, Overground, TfL Rail, Trams and DLR.

Transport for London said its review had found incidents with e-scooters had been caused by “defective lithium-ion batteries which ruptured without warning” and “led to fires that caused toxic smoke to be released”.

“TfL consider that if this were to happen again and fires occurred in an enclosed area like a Tube train or a bus, there could be significant harm to both customers and staff, as well as secondary injuries from customers trying to escape the area,” it said.

The move is backed by the London Fire Brigade, which confirmed an e-scooter caught fire on a train at Parsons Green underground station last month.

No one was seriously injured but one passenger suffered smoke inhalation.

The brigade said its concerns “mainly relate to faulty third-party batteries, as many of the incidents firefighters are attending involve batteries which have been sourced on the internet and don’t meet the correct safety standards”.

The brigade’s assistant commissioner for fire safety, Paul Jennings, said: “We have growing concerns about the safety of e-scooters and e-bikes due to the amount of fires we are seeing involving them, so we fully support TfL’s ban of private e-scooters on public transport.

“Fires are dangerous and terrifying wherever they happen, but a fire on the transport network has the potential to become very serious very quickly and involve hundreds of people, particularly on trains where evacuation may be challenging, so anything that can be done to mitigate that risk is a positive step.”

Lilli Matson, TfL’s chief safety, health and environment officer, said: “Our primary concern is always for the safety of our customers and staff. We have been extremely worried by the recent incidents on our public transport services, which involved intense fires and considerable smoke and damage.

“We have worked with London Fire Brigade to determine how we should deal with these devices and, following that review, we have decided to ban them.

“Customers who try to bring them onto our network will be refused access to our stations and premises, and not be permitted to use any of our services.”

It comes after the Metropolitan Police launched a crackdown on the use of e-scooters on the public highway and ScotRail is also considering a ban.