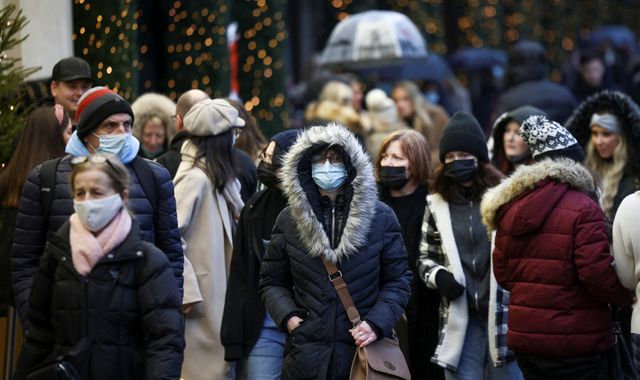 Another 1,576 cases of the Omicron variant of COVID-19 have been reported across the UK, taking the total to 4,713.

Of the latest number, 1,534 were in England, 27 were in Scotland, 15 were in Wales, and none in Northern Ireland, according to the UK Health Security Agency.

There were 1,239 new cases reported yesterday.

It comes after the first death of a patient with Omicron in the UK was confirmed by Boris Johnson.

Earlier, Health Secretary Sajid Javid said there were 10 people in hospital in England with Omicron, but warned that cases, hospital admissions and deaths will rise.

The UK Health Security Agency said the 10 are spread around the country and their ages range between 18 and 85.

The majority have received two doses of a vaccine though it is unclear whether any of those affected have underlying health conditions.

Mr Johnson said he wants the booster rollout to “hit warp speed”, to combat the rise in cases. Omicron now represents about 40% of coronavirus cases in London and “tomorrow it’ll be the majority of the cases” in the capital, he added.

The PM has also refused to rule out further COVID-19 restrictions before Christmas as the variant spreads.

Crowds of people have flocked to vaccination centres to get booster jabs today – queuing for hours in some instances – after the programme was opened up to all over-18s.

In England a booster is available to everyone aged 18 or over from this week as long as the second dose was at least three months ago.

Over-30s can already book a booster online and, from Wednesday, this will be extended to over-18s.

The goal, according to the PM, is to offer a booster to every adult by the end of the year.

There has been confusion over whether people will be guaranteed a jab by 31 December, with NHS England saying everyone will have been offered the chance to book a booster.

On Sunday, the Mr Johnson said people would be able to “get” their jab by that date.

More than 40% of adults in the UK have already had a booster vaccination.

Share
Facebook
Twitter
Pinterest
WhatsApp
Previous articleManchester Arena bomb inquiry: Attacker Salman Abedi was misogynist who had ‘very bad’ and ‘disrespectful’ attitude towards women
Next articleKim Kardashian says her father ‘would be so proud’ as she passes law exam after failing three times