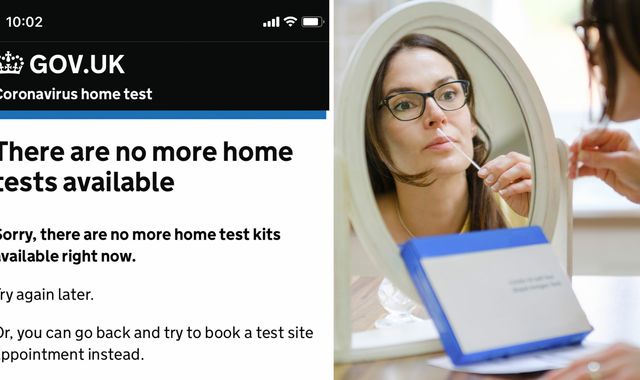 Ordering lateral flow tests on the gov.uk website has been temporarily suspended to fulfil existing orders “due to exceptionally high demand”, the UK Health Security Agency (UKHSA) has confirmed.

On Monday, scores of people complained on social media that they were unable to order rapid testing kits on the government’s website, receiving a message that read: “Sorry, there are no more home tests available right now.

“Or, you can go back and try to book a test site appointment instead.”

Releasing a statement as the issue continued, the UKHSA said: “Everyone who needs a lateral flow test can collect test kits – either at their local pharmacy, some community sites and some schools and colleges.

“Due to exceptionally high demand, ordering lateral flow tests on gov.uk has been temporarily suspended to fulfil existing orders.”

Less than half an hour before the UKHSA released their statement, Prime Minister Boris Johnson told broadcasters there remains a “ready supply” of lateral flow tests.

It comes less than 24 hours after an announcement that daily testing would become mandatory for anyone double-jabbed who comes into contact with a COVID-19 case.

From tomorrow, those fully vaccinated should take a daily lateral flow test for seven days to slow the spread of the virus, the government said.

People will be contacted by NHS Test and Trace or via the NHS COVID-19 app to tell them they are a contact of someone who tested positive and what action they need to take.

The move comes following a significant rise in Omicron infections in the UK with the variant expected to become the dominant strain in the UK by mid-December.

The shortage of lateral flow tests could also become a bigger problem from Wednesday when, if MPs vote in favour of the new coronavirus rules, the NHS COVID pass will be made mandatory for nightclubs and venues with large crowds.

It would mean those who haven’t been vaccinated cannot easily provide a negative home test as an alternative way to gain entry.

Asked about the issue by broadcasters later on Monday, the prime minister said: “They can get those tests, we do have a ready supply of lateral flow tests.

“If you can’t get one online for any reason, then there are ample supplies in the shops. But what I think, if I may say so, what that also shows is that people are doing the sensible thing, and getting tests as well.”

A Whitehall source told Sky News: “We have plenty of tests, people can continue to get them from pharmacies and other sites. We have seen a surge in demand and that is putting pressure on the delivery system rather than stock levels of home test kits.”

But shadow health secretary Wes Streeting called the situation a “total shambles”, while Labour’s deputy leader Angela Rayner added: “The government’s inability to procure properly and plan for civil contingencies is reckless. Boris Johnson has his priorities in the wrong place.”

Meanwhile, Lib Dem MP Layla Moran, chair of the all-party parliamentary group on coronavirus, said: “These critical failures are adding weight to accusations that last night’s announcement was all about politics but lacked the necessary plan or preparation from the government, leaving the NHS to pick up the pieces yet again.”

Those who need a lateral flow test can also try to pick up a kit from local pharmacies and they are also offered by some schools and workplaces.

Another option is to book a test site appointment instead.

There appeared to be no problems with the availability of PCR home test kits.

Chief executive of the Association of Independent Multiple Pharmacies, Dr Leyla Hannbeck, said: “In parts of the country there are no issues currently regarding availability of lateral flow tests but in some areas there are issues and pharmacies are being told that they are only allowed limited supplies per day.”

A spokesperson for Superdrug added: “We currently have lateral flow tests available. We are working closely with the Department of Health and Social Care to manage and review stock levels, as demand increases.”

And a spokesperson for Boots said: “Overall, we have plenty of stock of these tests across the UK and do not have any supply chain issues at present.

“However, there may be a small number of stores that are experiencing temporary shortages due to higher demand in certain areas. In these cases, we are able to advise patients of other pharmacies nearby that have these test kits in stock.”

Earlier on Monday, Health Secretary Sajid Javid advised that people should take lateral flow tests before meeting loved ones over the festive period because of the Omicron variant.

Mr Javid told Sky News that the UK is “once again in a race between the vaccine and the virus” as he urged everyone eligible to take up the offer of a booster jab.

The health secretary said the plan is for jab centres to be open for at least 12 hours on every day of the Christmas holidays, apart from Christmas Day itself.

“We have got to act early,” Mr Javid added, telling Sky News that ministers are “throwing everything” at the booster rollout, which is “more important than ever”.

Meanwhile, the NHS acknowledged the issues people have had trying to book in a booster vaccine on Monday after individuals had complained of receiving error messages, being stuck in queues for hours, or facing website glitches.

In a tweet, the NHS said there is “extremely high demand” and people should try again later today or tomorrow.

On Sunday, the UK reported 1,239 additional confirmed cases of the Omicron variant – the highest daily rise and nearly double the previous high recorded on Saturday.