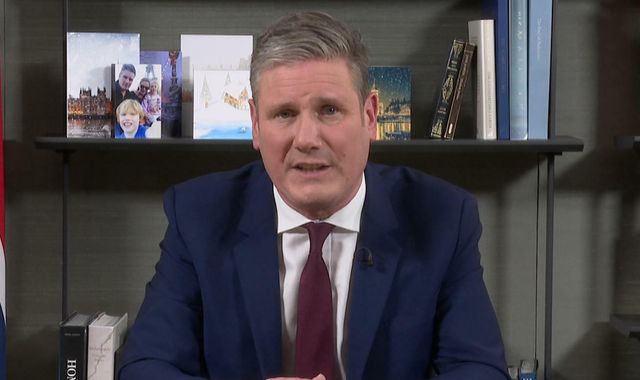 Sir Keir Starmer has launched a veiled attack on the Conservatives’ alleged lockdown breaches last Christmas as he said “festivities” should not “divert us from our national duty”.

The Labour leader said his party supports the government’s Plan B restrictions – unlike about 75 Tory MPs – and the plan to get all adults a booster vaccine before the end of December, announced 23 hours before by Boris Johnson.

And he called for parents to use the Christmas holidays to get children over 12 vaccinated to “stop the spread in schools”.

But, Sir Keir also took a sly jab at Mr Johnson, his staff and MPs over several alleged parties that took place last December while London was under Tier 2 and Tier 3 restrictions, with households not allowed to mix indoors.

“At times like this, we must all put the national interest first and play by the rules,” the Labour leader said.

“It would be easy to let the festivities we’ve all been looking forward to, divert us from our national duty.”

Mr Johnson is facing mounting pressure over the alleged parties, although the PM insisted he “certainly broke no rules” while hosting a virtual festive quiz at Downing Street last year.

Labour has called on the PM to “fess up” about whether he and staff partied and socialised while restrictions were in place.

A photo published by the Sunday Mirror showed the PM flanked by colleagues as he wore a Santa hat and was draped in tinsel in the Number 10 library on 15 December 2020.

The newspaper quoted a source who claimed that many staff were huddled by computers in their offices, conferring on questions and drinking alcohol, while the quiz was taking place.

Cabinet Secretary Simon Case has been tasked with investigating the quiz, a December Christmas party, festive drinks at the Department for Education and a November staff leaving do at Number 10.

Mr Case has the power to widen the investigation if fresh evidence comes to light, according to the Cabinet Office.

Downing Street staff are understood to have been told to expect the result of the review by the end of this week and before Christmas.

About 75 Conservative MPs are set to rebel against Tuesday’s vote on Plan B, with separate votes on increased mask wearing, a work from home mandate, vaccine passports for nightclubs and large events, and mandatory vaccination for NHS staff.

The number of rebels would be enough to defeat the government’s majority, however Labour have said they will support the plan meaning Mr Johnson will not lose – although confidence in him will be battered.