COVID-19: How PM plans to ramp up booster vaccinations – and how you can get one 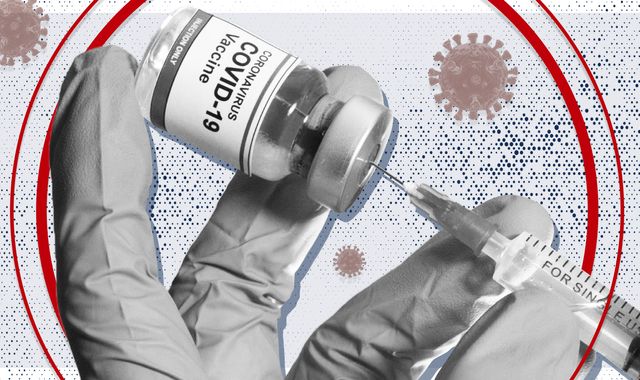 Boris Johnson has launched the Omicron Emergency Boost – a “national mission” to try to curb the spread of COVID infections in the UK as a “tidal wave” of the new variant “is coming”.

The prime minister said the initiative will be “unlike anything we have done before in the vaccination programme” and it aims to jab almost a million people every day.

“Do not make the mistake of thinking Omicron can’t hurt you, can’t make you or your loved ones seriously ill. We must act now,” he added, saying people were already in hospital with the new variant.

Mr Johnson said that to hit the booster pace that the UK needs, it will have to match its best vaccination day so far and then beat it “day after day”.

The highest number of COVID vaccinations reported in one day was 844,285 on 20 March this year, according to the government website.

On Saturday, 530,086 booster jabs or third doses were administered in the UK – the second-highest daily figure since 10 November when there were 532,238.

The prime minister said the national mission is needed because the number of infections of the new variant is doubling every two to three days.

How can you get your booster jab?

All those over 18 in England will have the chance to get a booster jab by the end of the year, bringing forward his original target by a month.

From today, the booster programme is being opened up to over-18s who have had their second dose at least three months ago.

They will be able to get their booster via walk-in sites in some areas from today, and from Wednesday they can use the NHS booking system for a slot.

And Mr Johnson promised there will be additional support for Scotland, Wales, and Northern Ireland.

How will hitting the booster target be achieved?

Mr Johnson said he is asking those on the front line of health services for “another extraordinary effort now”.

• Additional vaccine sites and mobile units will be set up

• And opening hours will be extended, so clinics can run seven days a week

• He said this will mean more appointments are available earlier in the morning, in the evening, and at weekends

• He also said thousands more volunteer vaccinators will be trained up

The PM urged those people who have not had any vaccine to get a jab, so they have some protection.

And for those who have already received their booster, he urged them to encourage friends and family to do the same.