COVID-19: First Omicron death in UK – as PM warns variant will make up majority of London’s coronavirus cases by Tuesday 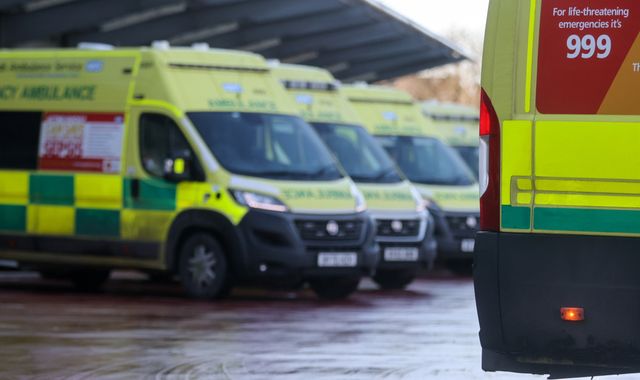 At least one patient has died with the Omicron variant of COVID-19, the prime minister has said.

Speaking during a visit to a vaccination clinic near Paddington, in west London, Boris Johnson said: “Sadly yes Omicron is producing hospitalisations and sadly at least one patient has been confirmed to have died with Omicron.

“So I think the idea that this is somehow a milder version of the virus, I think that’s something we need to set on one side and just recognise the sheer pace at which it accelerates through the population. So the best thing we can do is all get our boosters.”

The UK Health Security Agency (UKHSA) confirmed that 10 people have been hospitalised with the Omicron variant in England – the individuals were diagnosed on or before admission.

These people are spread around the country and are a mix of age ranges between 18 to 85 years, with the majority having had received 2 doses of vaccination, the agency added.

One individual, diagnosed in hospital, has sadly died.

Dr Susan Hopkins, chief medical adviser at UKHSA, said: “Hospitalisations always lag a few weeks behind infections, therefore it isn’t surprising that we have started to see people being admitted to hospital with the Omicron variant.

“Our data shows that getting the booster vaccine is more effective against this variant than 2 doses alone. Everyone over 18 is now able to walk into a vaccine centre, so do not hesitate to get yours.”

On Sunday, the UK reported 1,239 additional confirmed cases of Omicron – the highest daily rise and nearly double the previous high recorded on Saturday.

Speaking to broadcasters on Monday morning, the prime minister also repeatedly declined to rule out further coronavirus restrictions being introduced ahead of Christmas as the Omicron variant spikes.

Addressing the media during the vaccination clinic visit, the PM said: “Throughout the pandemic I’ve been at great pains to stress to the public that we have to watch where the pandemic is going and we take whatever steps are necessary to protect public health.

“We think the steps that we are taking – so Plan B, combined with a hugely ambitious acceleration of the booster campaign, bringing it forward by a month so we offer a booster to every adult by the end of the year – we think that’s the right approach.”

The prime minister said MPs thinking of rebelling against Plan B measures needed to recognise there was “no room for complacency” in dealing with Omicron ahead of a Commons vote on the new measures on Tuesday.

Mr Johnson added that Omicron now represents about 40% of coronavirus cases in London and “tomorrow it’ll be the majority of the cases” in the capital.

He told broadcasters that, due to this increase in cases, he wants the booster rollout to now “hit warp speed”.

It follows his announcement on Sunday that everyone aged 18 and over in England will have the chance to get their booster vaccine before the end of the year.

Mr Johnson said every adult who had their second vaccine at least three months before will now be able to book a booster jab from Wednesday.

On Monday, he clarified that the aim is to “offer a booster” to every adult by the end of the year.

The move follows a significant rise in Omicron infections in the UK with the variant expected to become the dominant strain in the UK by mid-December.

Earlier, the health secretary told Sky News that ministers will “throw everything at” the COVID booster programme to tackle Omicron.

Mr Javid will deliver a statement on COVID-19 to the Commons later today, it has been confirmed.

GPs will only focus on urgent needs and vaccinations for the next few weeks.

The NHS website was repeatedly crashing on Monday morning as so many people attempted to book their third doses.

Shadow health secretary Wes Streeting said confirmation of the first person to have died with Omicron “underlines the seriousness of the situation”.

He tweeted: “The awful news of the UK’s first Omicron death underlines the seriousness of the situation and my heart goes out to their family and friends.

“This is why the booster rollout is so vital and public health measures are necessary to reduce its spread.”