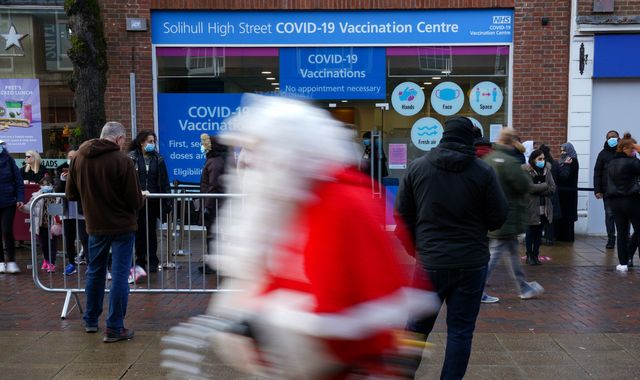 The UK has reported 1,239 additional confirmed cases of the Omicron variant – the highest daily rise and nearly double the previous high recorded on Saturday.

That takes the total numbers of cases of the variant to 3,137 in the UK.

Of those, 1,196 new cases were reported across England with 2,953 overall recorded.

In Scotland, another 38 cases were reported on Sunday, taking the total there to 159.

There were no additional cases reported in Wales, which currently has 15 total infections of the variant.

But five more cases were reported in Northern Ireland, which now has 10 in total.

On today’s Trevor Philips on Sunday programme on Sky News, vaccines minister Nadim Zahawi said that it was now known that there are cases in hospital with Omicron and a third of London cases were the new variant, which only emerged in South Africa about a month ago.

He told Sky News: “It is highly infectious so the doubling rate is between two and three days, so very quickly Omicron will be the dominant variant in the United Kingdom and probably the rest of the world.

“It is now a race between the booster and that protection and the Omicron variant.

“We now have a variant that is so infectious that it will dominate and of course exponentially grow.

It comes after The Sunday Times reported that healthcare staff had been told to start getting ready for the mass vaccination of primary school children ahead of it potentially being approved by regulators, with children as young as five to be jabbed.

The newspaper said at least two confirmed Omicron variant outbreaks have been reported in primary schools in England.

Pfizer has been approved for use on children as young as five in the EU, the US and many other countries. A rollout for primary aged children in Europe is due to begin tomorrow.

Secondary school children aged 12-15 in the UK are already eligible to receive a single dose of the Pfizer/BioNTech COVID-19 jab.

No plan to vaccinate young children

On Saturday, new modelling suggested that, under one scenario, almost twice the number of coronavirus patients could be admitted to hospital compared with last year due to Omicron.

Experts from the London School of Hygiene & Tropical Medicine (LSHTM) used experimental data to look at how Omicron may spread as the country heads into 2022 and found it could cause between 25,000 and 75,000 deaths in England over the next five months if no additional measures are taken beyond Plan B.

The government is yet to release the figures for the total number of COVID infections and deaths for the last 24 hours.