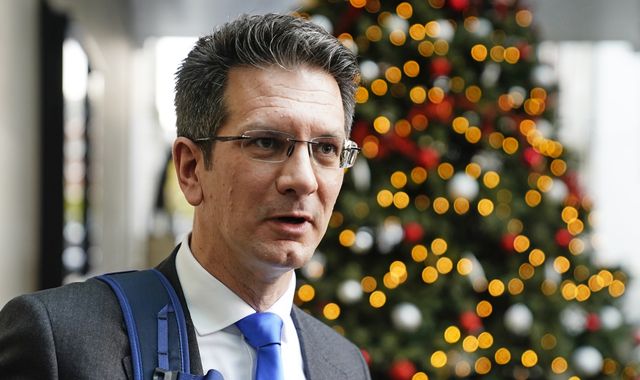 The Conservative Party is drifting into authoritarianism, a senior Tory MP has warned, as he confirmed he would oppose new coronavirus restrictions.

Former Brexit minister Steve Baker told Sky News he believed at least 60 of his party colleagues at Westminster would join him in voting against the imposition of further COVID-19 measures by Boris Johnson this week.

However, despite the expected rebellion – potentially the biggest faced by the Tory leader – the latest coronavirus rules are set to become law after Labour leader Sir Keir Starmer said his party would vote with the government on Tuesday.

The prime minister is already coming under fire after a picture of him emerged at a Downing Street Christmas quiz last year, amid a series of alleged rule-breaking parties in Number 10 and Whitehall.

Mr Johnson announced on Wednesday he would be triggering Plan B in a bid to slow the spread of the highly contagious Omicron variant, which has already led to hospitalisations.

A number of Conservative MPs have criticised the proposals, which include vaccine passports being made mandatory for large venues, compulsory mask-wearing in most public indoor settings and guidance for staff to work from home where they can.

Speaking to the Trevor Phillips On Sunday programme, Mr Baker said: “I think what we are doing now is creating a miserable dystopia into which we are going forward.”

He added: “It is going to be at least 60 people voting against but of course, it’s a foregone conclusion because our useless opposition in name only will continue to support the government, however authoritarian they are.

“This disease will now be with us forever, there will be new variants, the vaccine continues to give a high degree of protection against serious illness and death and we just do now need to get on with our lives.”

Stressing the importance of freedom under the rule of law, he said: “We’ve got to show that there’s a movement for that frame of mind because if we don’t, the Conservative Party will continue to drift into authoritarianism and I simply cannot stand idly by while that happens.”

Confirming his backing for the measures, Sir Keir said: “I think the restrictions that are going to be voted on on Tuesday are necessary.

“I say that having spoken to the government scientists and consulted our own scientists.

“We are not there to support the government but we will do what is in the public interest.”