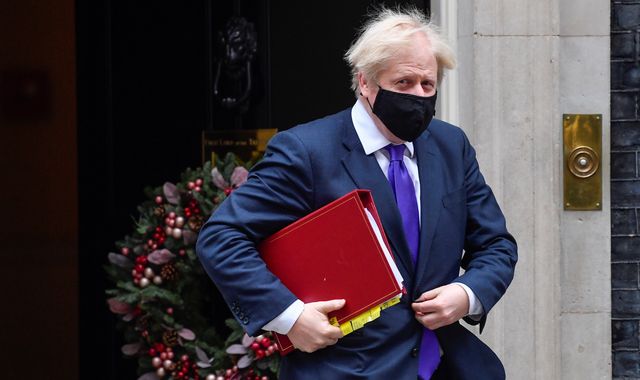 An image obtained by the Sunday Mirror shows the prime minister on a screen in his office flanked by two colleagues and reading out quiz questions for Number 10 staff.

Labour says the image shows Mr Johnson has been presiding over a “culture of disregard for the rules” and is “unfit to lead the country”.

“What do we see in that picture? We see a prime minister on a virtual quiz night for 10 to 15 minutes to thank his staff, who by the way, had no choice but to come in every single day,” he told Trevor Phillips On Sunday.

“Sitting in his office are the two people who are closest working with him, no alcohol on the table, not drinking, on a Zoom call or a Teams call, a virtual call respecting the lockdown rules.

“Many people would have had similar Zoom quiz nights around the country.”

The image was reportedly taken on 15 December last year when London was under Tier 2 restrictions, banning indoor household mixing, apart from support bubbles.

Official guidance at the time also stated: “You must not have a work Christmas lunch or party, where that is a primarily social activity and is not otherwise permitted by the rules in your tier.”

‘This was a virtual quiz’

Workers who took part in the Christmas quiz reportedly huddled around computers, with groups said to have broken rules on gatherings, and drinking alcohol bought from a nearby supermarket.

A source told the newspaper that in one instance 24 people gathered in an office – in four teams of six people.

Teams from the PM’s private office, the policy unit and press office were among those taking part, according to the Sunday Mirror.

A Number 10 spokesperson confirmed the quiz took place but said the PM was involved “briefly”.

A statement said: “This was a virtual quiz. Downing Street staff were often required to be in the office to work on the pandemic response so those who were in the office for work may have attended virtually from their desks.

“The prime minister briefly took part virtually in a quiz to thank staff for their hard work throughout the year.”

PM ‘is a man unfit to lead this country’

Responding to the photo, Angela Rayner, Labour’s shadow chancellor for the Duchy of Lancaster, said: “While the rules said that people shouldn’t have Christmas parties at work and Britons across the country were doing the right thing, Boris Johnson was instead happy to preside over a culture of disregard for the rules at the heart of government.

“Despite repeated denials of parties in Number 10, it now transpires that there were numerous parties, gatherings and the prime minister even took part in a festive quiz.

“Boris Johnson really believes it’s one rule for him, another for everyone else. He is a man unfit to lead this country.”

The snap of the incident was taken three days before an alleged rule-breaking Christmas party at Downing Street on the 18 December.

Around 40 people were in attendance, according to sources who have spoken to Sky News, while other media reports said staff were encouraged to bring “Secret Santa” presents.

That alleged gathering is one of three now the subject of an official probe by top civil servant Simon Case.

It follows the publication of a video from last year showing government spokesperson Allegra Stratton and other staff joking about the 18 December event. Ms Stratton has since resigned.

Two days prior, on 16 December, Tier 3 restrictions came into effect in London, meaning people were not allowed to mix indoors with anyone outside their household or support bubble, or outdoors in hospitality venues or private gardens.

PM ‘satisfied’ no rules were broken

Downing Street has insisted that no parties took place and last week, Mr Johnson said he was “satisfied” no rules had been broken.

Nevertheless, Mr Johnson is facing pressure from both sides of the Commons over the claims, with many MPs suggesting he has damaged public trust in coronavirus regulations.

It is said to have taken place on 27 November and was attended by the PM, who the Mirror said made a speech.

He is also looking into a festive celebration arranged at the Department for Education, which officials have expressed regret over.

The Department for Work and Pensions (DWP) has since confirmed that staff working for Therese Coffey drank alcohol and ate takeaways “late into the evening” on a number of occasions while coronavirus restrictions were in place last year.

It comes after the Sunday Mirror reported that political staff and officials frequently drank after work until the early hours of the morning, and ordered food to the Work and Pension Secretary’s office at the department’s Whitehall headquarters.

The DWP has confirmed there were times when alcohol was consumed in a work space outside the Cabinet minister’s Whitehall office but stressed they took place while work was continuing past normal employment hours.

A source told the PA news agency the desks in the office are socially distanced and there was “no party atmosphere going on”.

As the row over Mr Johnson’s handling of Christmas parties continues to escalate, Downing Street is facing a damaging revolt from a growing number of Tory backbenchers when new measures to tackle the spread of Omicron are put to a vote in the Commons on Tuesday.

More than 60 Conservative MPs are now said to be against the proposals, which include compulsory mask-wearing in most public indoor settings, guidance for employees to work from home, and vaccine passports to be made mandatory for large venues.

‘Conservative Party is in the wrong place’

Steve Baker, Conservative MP for Wycombe, and deputy chairman of the COVID Recovery Group, writes in The Sunday Telegraph: “I am filled with sorrow to see us squandering this goodwill and trust.

“Across a range of issues, today’s Conservative Party is in the wrong place and heading in the opposite direction of Conservativism.”

Sir Graham Brady, Conservative MP for Altrincham and Sale West, and chairman of the Tory backbench 1922 Committee, has questioned how the government “has presided over such a disastrous assault on liberty?”

Writing in the Sunday Telegraph, he says: “This train will go on until someone has the presence of mind to pull the communication cord.

“So as well as debating Plan B measures, we should be asking ourselves whether we want to restore the dignity of controlling our own lives or not. It’s time for this to end.”