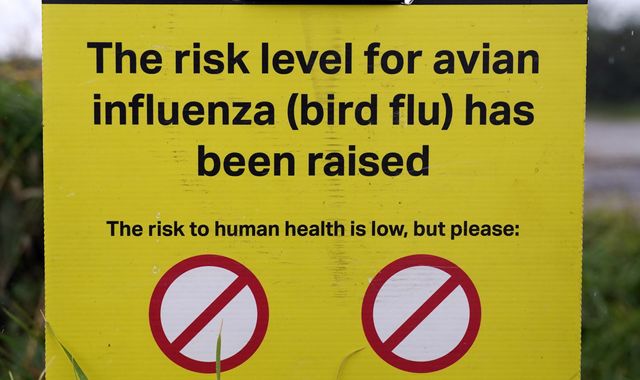 The UK’s “largest ever” outbreak of avian flu has been recorded in Northern Ireland after two further suspected cases were discovered.

The cases were identified in a commercial poultry flock of 14,000 birds near Markethill in County Armagh and a commercial duck flock of 22,000 in Coagh, County Tyrone.

Disease control measures including the humane culling of the affected birds have been put in place.

Two positive cases were confirmed earlier this month in each of the counties, at Aughnacloy and Broughshane.

“This is now not only the largest ever outbreak of HPAI in the UK but also in Northern Ireland and we must do all we can to protect our flocks, protect our businesses and protect the economy.

“I cannot stress enough how important it is that flock keepers reassess all of their biosecurity measures immediately.”

About half a million birds have been culled so far, according to UK chief veterinary officer Christine Middlemiss, who said there were 38 infected premises in England, Scotland and Wales.

‘We cannot afford to be complacent’

“This strain of H5N1 spreads quickly and could wipe out an entire flock in a matter of days,” he said.

“I am urging all bird keepers to proactively assess your current biosecurity measures and redouble your efforts to keep this disease out of your flocks.

“We cannot afford to be complacent and must act now to protect our flocks.”

Temporary control zones (TCZs) have been introduced at the sites of suspected cases and samples have been sent to the National Reference Laboratory for testing.

If avian flu is confirmed, the TCZs will be replaced with a three-kilometre protection zone and 10km surveillance zone.

Some 22,100 ducks were culled earlier this month after the bird flu case in Aughnacloy, with the same measured applied to the “small backyard flock” in Broughshane.

Flock owners will receive compensation for their lost livestock.