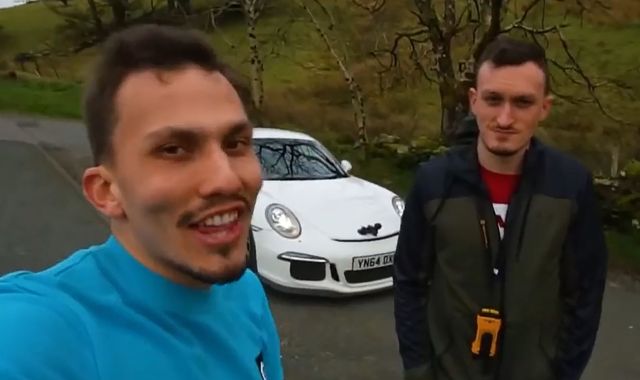 Two men have been sentenced after appearing in YouTube videos driving at more than 100mph in Porsches.

David Murray and Timur Khayrov, both aged 30, drove from their homes in Scotland to North Wales in March last year to record footage for YouTube channel Vehicle Villains.

But the video, filmed in the style of TV show Top Gear, was also spotted by police.

The men were then charged with dangerous driving.

Both were given an eight-month prison sentence, suspended for 12 months, at Caernarfon Crown Court, a spokesman for the Crown Prosecution Service (CPS) said.

The pair, who pleaded guilty at an earlier hearing, were also ordered to carry out 200 hours of unpaid work and banned from driving for 18 months.

The men will have to take an extended re-test before they are allowed to drive again and were each ordered to pay £540 costs, the CPS said.

Murray reached speeds of up to 116mph and Khayrov drove at up to 105mph along roads in Conwy and Gwynedd on 16 March 2020.

The video sees them describe the stretch of the B4391 between Bala and Ffestiniog as “the greatest driving road in the UK”.

Footage shows Murray in a yellow Porsche 718 Spyder and Khayrov in a white Porsche GT3 driving at high speeds.

When the drivers pull in after driving the stretch of road, Khayrov, of Glasgow, is seen laughing and saying: “That was sick.”

Murray, of Aberdeen, tells the camera: “That was just unbelievable.”

Andrew Warman, of the CPS, said: “The two men showed a complete disregard for the safety of other road users which could have had devastating consequences.

“They treated these public roads as if they were a private racetrack and it’s fortunate that nobody was seriously injured.

“The CPS authorised charges of dangerous driving after reviewing the evidence submitted by the police.”