No confidence votes: What are they, could Boris Johnson face one and how would a leadership challenge work? 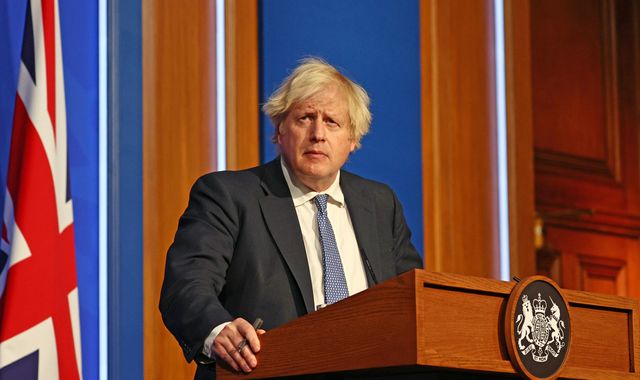 Boris Johnson may have been voted in as prime minister by the British people but he relies on the continued support of his Conservative backbench MPs to remain in position.

But after a series of scandals over lobbying, a Peppa Pig World speech, the Downing Street flat refurbishment and reports of Christmas parties during last winter’s lockdown, more and more Tory MPs have voiced their disquiet with the PM.

The implementation of “Plan B” COVID restrictions has also not helped the PM, with more than 50 Conservative MPs publicly saying they will vote against the measures, which include vaccine passports.

Gavin Barwell, a former Tory MP and chief of staff under Theresa May when she was PM, told Sky News Mr Johnson’s standing with his MPs was “very low”.

“He is going to have to change the way he runs the government and the Downing Street operation if he wants to get through this,” he told All Out Politics.

“The key point is that many of these wounds are self-inflicted, that’s what’s making Conservative MPs so angry.”

At the end of November, reports were swirling that letters of no confidence were being sent to the influential 1922 Committee of Tory backbenchers.

What do these letters mean, how many are needed to trigger a vote and what would a potential leadership contest involve?

What do the letters mean?

Tory MPs disgruntled with their party’s current leadership can submit no confidence letters to the 1922 Committee of backbench Conservative MPs.

The Conservative Party’s rules state that at least 15% of Tory MPs must write a no confidence letter to make a leadership challenge possible.

Under the Conservative Party’s rules, letters are handed in confidentially, so no accurate total of how many have been submitted to Sir Graham is available.

Sir Graham is therefore likely the only person who knows the real tally of letters.

In 2018, when former prime minister Theresa May faced a no confidence vote after the then threshold of 48 letters was reached, Sir Graham said not even his wife knew how many MPs had written to him.

If the 1922 Committee received 54 letters from backbench Conservative MPs, a vote of no confidence is triggered.

Is the PM at the point where he could be ousted?

“It’s not just one issue, there are obviously several issues,” she said.

“This is a very very dangerous position for the PM to be in but we are still a long way from a position where the prime minister can be completely pressured into going and I think that’s something we’ve got to bear in mind.

“There still has to be that mechanism in order to get rid of a PM – which is a vote of no confidence.

“Even if a vote of no confidence is called, whether there are enough votes to support that – it’s a bad position to be in, it’s had a bad impact on him electorally but what this actually means practically is yet to be seen.”

It meets weekly when parliament is sitting, with the gatherings usually providing an indicator of backbench support for the leadership, direction of the party or major policies.

A Tory leader or other senior member of the party is invited to attend 1922 meetings on occasion.

Often referred to as “the men in grey suits”, the 1922 Committee is led by an 18-member executive committee with a chair elected by committee members.

How would a vote of no confidence work?

If 54 no confidence letters are received, a vote will be held.

It will take place in the form of a secret ballot where all Conservative MPs will have to decide if they have confidence in their party’s current leader or not.

The ballot is usually open for a few hours on one particular day, and Mr Johnson would have to secure the backing of half of his MPs plus one to survive.

If a vote was to take place and Mr Johnson was to gain the backing of 181 of his MPs – half, plus one – he would be immune from a further challenge for another year.

If Mr Johnson was to lose, there would be a leadership contest and he would be barred from entering.

However, if Mr Johnson were to just scrape enough votes to allow him to stay on, he could decide to stand down of his own accord – automatically triggering a leadership contest.

What would a potential leadership contest involve?

If a Conservative Party leader does not secure the confidence votes of half of their backbench MPs plus one, a leadership contest will be held to replace them.

The 1922 Committee would set the timetable for the contest.

To take part in the race, a Conservative MP has to be nominated by two colleagues.

If more than two Tory MPs put themselves forward and secure the nominations of two other colleagues, a series of secret ballots will be held to whittle them down.

The individual who receives the fewest number of votes will be eliminated after every round until two candidates remain.

When just two Conservative MPs are left in the race, party members get to make their final choice before a deadline set by the 1922 Committee.

The winner will become Conservative Party leader and PM if the party are in power and a general election is not held.