COVID: Another 633 Omicron cases found in the UK in biggest daily jump of the variant 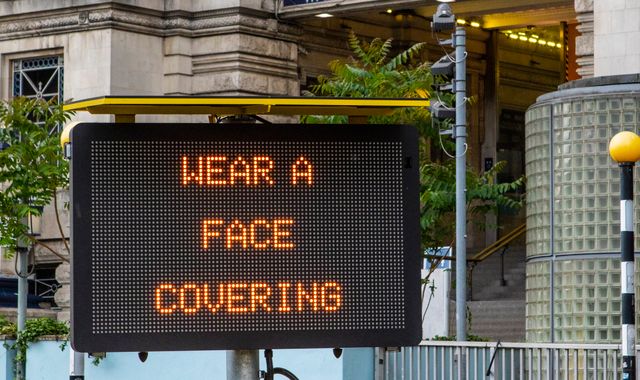 Another 633 Omicron cases have been found in the UK – the biggest daily increase since the COVID-19 variant has been detected in the country.

The latest figure brings the total number of confirmed Omicron cases to 1,898 across the country, the UK health security agency said.

In England, another 618 confirmed cases of the variant were reported, with 1,757 in total.

Two additional cases were reported in Wales, taking the number there to 15.

A further two were confirmed in Northern Ireland, where there are currently five total cases.

On Friday, 448 new cases of the variant were recorded, while overall COVID infections stood at more than 58,000.

It comes as experts are warning the Omicron variant could cause between 25,000 to 75,000 deaths in England over the next five months if no additional measures are taken beyond Plan B.

New modelling from the London School of Hygiene & Tropical Medicine (LSHTM) used experimental data to look at how Omicron may spread as the country heads into 2022.

It prompted a government spokesperson to say: “We continue to look closely at all of the emerging data.

“We’ve been clear throughout that vital vaccines and boosters are our best line of defence against this virus and that is why we are urging people to come forward as quickly as possible as they become eligible.

“Plan B remains a proportionate response based upon what we know, so we encourage everyone to follow the rules by wearing a face covering, working from home if you can, testing regularly and coming forward for your booster when called.”

No Omicron deaths so far

On Friday, the UK Health Security Agency released an update on Omicron, saying that none of the cases to date had resulted in someone going to hospital or dying.

The government is yet to publish the figures for the total number of extra cases and deaths from all variants reported in the last 24 hours.