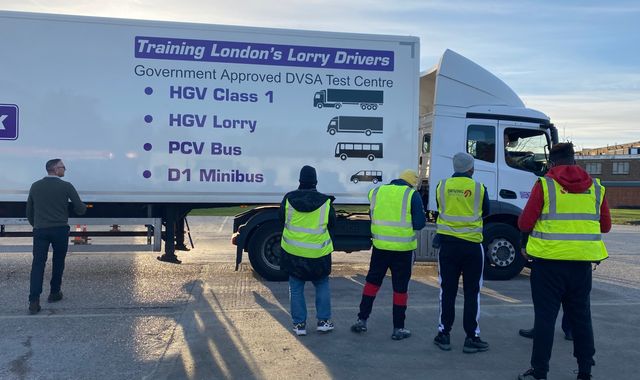 The first intensive short courses designed to help more people become HGV drivers are under way, as the country continues to battle a big shortage of delivery professionals.

The scheme comes under the government’s Skills Bootcamps programme, designed to support employment in key areas of the economy.

A major theme of the supply chain crisis facing the UK this year has been the dearth of lorry drivers able to keep goods moving from A to B, contributing to empty supermarket shelves, delays in products leaving ports and even the panic buying-inspired fuel shortage in the autumn.

At its height in the summer, the haulage industry estimated it was 100,000 people short.

The scenario was a result of many drivers leaving a traditionally unattractive sector to work in and Brexit, which prevented EU drivers returning after 2020 COVID lockdowns.

An angry industry backlash against the government secured only a part-relaxation of immigration rules in September to help alleviate the shortage.

The temporary visa programme, taken up by a small number of drivers, also only runs until Christmas.

But the Road Haulage Association now believes the shortage has improved to around 80,000 drivers – thanks also to greater testing capacity and publicity around rising wages.

The shortage of drivers has bolstered pay power with sign-on and also retention bonuses commonplace this year as firms look to guarantee their workloads.

Ministers see filling the jobs as an important part of fulfilling Boris Johnson’s aim of a high wage and domestic-driven jobs market.

Subscribe to ClimateCast on Spotify, Apple Podcasts, or Spreaker.

The Skills Bootcamps in HGV driving are part of wider aid to build up employment and skills in areas of high demand.

The programme also offers free courses of up to 16 weeks for those aged 19 and above in sectors including the digital economy and construction.

They also guarantee a fast-tracked interview with a local employer afterwards.

Actions to help get more HGV drivers on the road

For potential HGV drivers, or those wishing to bolster their skills, the £34m scheme now has spaces for an expanded 11,000 people in total – up from an initial 5,000.

At least 2,000 people had registered their interest so far via the National Career Service and Jobcentres before the first course got under way, at Croydon in south London.

They are seen as a pathway to being able to take the specialist driving tests demanded of haulage drivers.

The Department for Education said it expected that the first graduates would be on the road from March, aided by a boost in testing capacity of 500 more tests per week.

Ministers’ help to arrest the decline in HGV drivers – a profession that often requires long times away from home – has also included a commitment to help tackle poor facilities for drivers on the road network.

Transport Secretary Grant Shapps said: “The government has worked tirelessly to tackle the driver shortage caused by coronavirus and years of undervalued wages.

“We have now introduced 32 actions to help get more HGV drivers on the road.

“It is good to see that these measures are clearly working, with the haulage industry reporting a significant increase in tests carried out and licenses issued.

“Now these training camps will provide a further boost for the sector as we work together towards its recovery.”