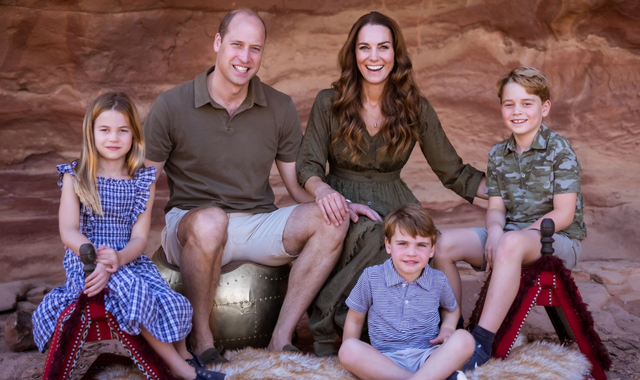 The Duke and Duchess of Cambridge have released their official Christmas card photograph showing their family during a trip to Jordan.

The snap was taken during a visit earlier this year to Jordan, which holds a special place in Kate’s heart as she spent part of her childhood years in the Middle East country when her father Michael worked for British Airways.

The duchess, 39, was pictured beaming while wearing an olive-green shirt dress, as she placed one hand on her husband William’s knee and the other hand around George’s waist.

The picture was accompanied by a caption that said: “Delighted to share a new image of the family, which features on this year’s Christmas card.”

This was followed with a picture of a Christmas tree emoji.

At the time, the family wore chunky knitwear as they posed at Anmer Hall, their Norfolk home.

The new Christmas picture has also been released on the same week Kate hosted a Christmas carol service at Westminster Abbey.

The event, which will be screened on television on Christmas Eve, was called Together at Christmas and was made to thank 1,200 individuals and organisations that have been supporting communities during the pandemic.

Kate was joined by William, 39, and other royals, including Sophie, the Countess of Wessex, Princess Beatrice and her husband Edoardo Mapelli Mozzi, as well as Princess Eugenie and Zara and Mike Tindall.

Kate wrote a foreword in the Abbey’s order of service, where she spoke of a “shared brighter future”.

She said: “Christmas is a time when we can reflect on the past, listen to one another, focus on the relationships that nurture us and build our resilience, so we can look forward to a shared brighter future.

“My hope is that this service creates a moment for us to do this together.”

William gave a reading to the audience and was joined by TV host Kate Garraway and Paralympian and doctor Kim Daybell.