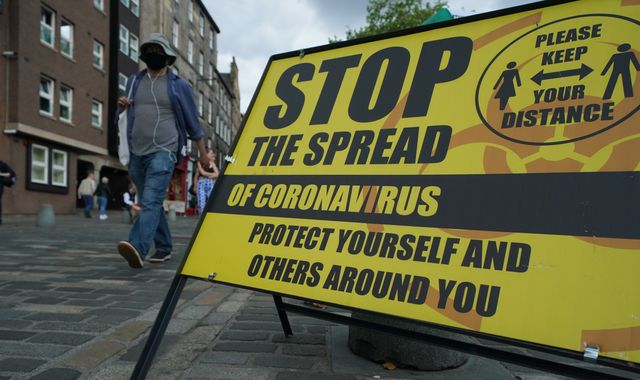 Scotland’s First Minister Nicola Sturgeon has warned of a “potential tsunami of infections” in the face of the fast-spreading Omicron variant.

She said the virulent new COVID-19 strain will “run riot” through the wider population as she cautioned the R number could rise above 2, meaning on average every 10 people with the virus will infect more than 20 others.

Cases could surge to as many as 25,000 a day in the worst case scenario, according to modelling in a Scottish government evidence paper.

Ms Sturgeon said household contacts of confirmed coronavirus cases would have to self-isolate for 10 days regardless of vaccine status or negative test results, and urged people to reconsider holding Christmas parties.

It comes as further restrictions come into force in England in response to the Omicron variant.

Giving a news update, the SNP leader said: “The fact is that we do face a renewed and a very severe challenge in the face of the new Omicron variant.

“To be blunt, because of the much greater and faster transmissibility of this new variant we may be facing, indeed we may be starting to experience a potential tsunami of infections.”

She added: “This a variant that is and is going to – forgive the non-technical language – run riot through not just the Scottish population.”

It was likely Omicron would become the dominant variant of COVID-19 in Scotland in “days, not weeks”, as it’s showcasing “perhaps the fastest exponential growth that we have seen in this pandemic”, said Ms Sturgeon.

Ms Sturgeon stressed that, although evidence suggested the variant could dodge some immunity provided by vaccines, people should still get jabbed.

She said: “Based on preliminary laboratory trials, the best evidence suggests it can evade to some extent the immunity conferred by vaccination.

“Now, and I want to triple underline this point, that does not mean that the vaccines will not significantly help us – being less effective is not the same, nowhere near the same, as vaccines being ineffective. And booster doses in particular will help retain a higher level of vaccine efficiency.”

Even if the Omicron variant is less severe, she pointed out that “a smaller percentage of a bigger number will still result in a massive number of cases who might need hospital care”.

She added: “Given the volume of people who could be infected by Omicron because of its greater transmissibility, even if most of those cases are mild, the number of cases of serious illness will put massive strain on the ability of the NHS to cope.”

A “significant strain” will also be put on the economy given the number of people who would be required to self-isolate as a result of the transmissibility of the new variant, she added.

In addition, Ms Sturgeon said she could not rule out further restrictions being imposed in Scotland.

She said: “We know that any additional protective measures will cause social and economic harms, especially after almost two years of this pandemic.

“But we also know from past experience that early action is often needed when dealing with this virus – in fact, acting early is often the best way of acting proportionately.

“So we can’t rule out further measures, and I’m afraid we can’t avoid the advice that I have shared with you today.”