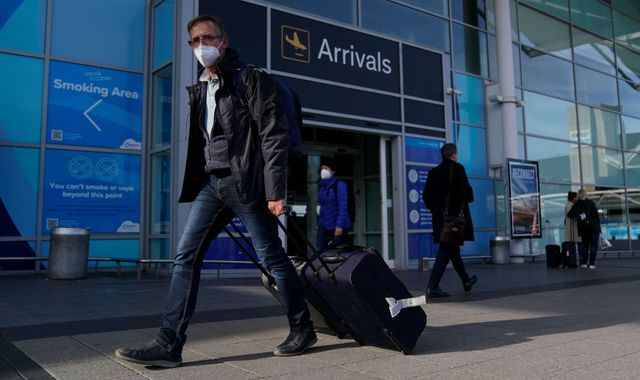 Lawyers representing travellers angry at having to quarantine at hotels say they will appeal after losing a judicial review on the matter.

PGMBM, an international law firm, lost the judicial review at the High Court on Thursday.

It argues that mandatory hotel quarantine of people fully vaccinated against COVID is unlawful and an interference with their right to personal liberty.

Sven Goosen, 44, is currently in one of the hotels following his return from South Africa and suggested it was like a prison.

“It’s really stressful. We are treated like prisoners, like animals, the numbers of guards is disproportionate to the risk that is actually here,” he said.

Lawyers have called on the government to quash rules, which left couple Emily Mennie and Owen Hancock with a £4,000 credit card bill after travelling home from South Africa.

“Law-abiding citizens who have been double-vaccinated and tested negative should be free from hotel quarantine. The idea that they need to pay for the privilege of their own imprisonment is outrageous.”

“It’s a slam dunk,” Ms Mennie said, shortly after the prime minister admitted on Wednesday that it was a “fair challenge” to question the red list travel restrictions.

“If Boris Johnson thinks the cost of hotel quarantine is too high, and that double-vaccinated people from red list countries could isolate at home, why on earth are my husband and I, and hundreds of others, being unfairly charged the extortionate cost of nearly £4,000?”

Mr Hancock added: “It seems Number 10 has been unable to stick to its own COVID rules, holding parties while the rest of us were locked down.

“Now, here we are diligently obeying his unreasonable rules in hotel quarantine, when the prime minister tells the British public that it’s unfair and we don’t need to be.”

Ella Wilson is on day six of quarantine at a hotel near Gatwick Airport. Her two year-old son was climbing over her as she spoke to Sky News on a video call.

“We need to be going outside with him,” she said.

“We’re allowed 20 minutes outside a day if we’re lucky.

“Secondly, the food choices, there is no choice for children. It is only what they give you. If it wasn’t for my sister living nearby and dropping food to us, he would go hungry.”

The risk posed by individual countries is monitored continuously and the red list is reviewed every three weeks.

A government spokesperson said: “We have taken precautionary and temporary action at the border to help slow down the seeding of the Omicron variant in the UK from abroad, buying time for our scientists to learn more about the variant.

“We are rapidly expanding our hotel capacity and have doubled the number of hotel rooms available from Monday [6 December]. We will continue to increase availability on a daily basis.”