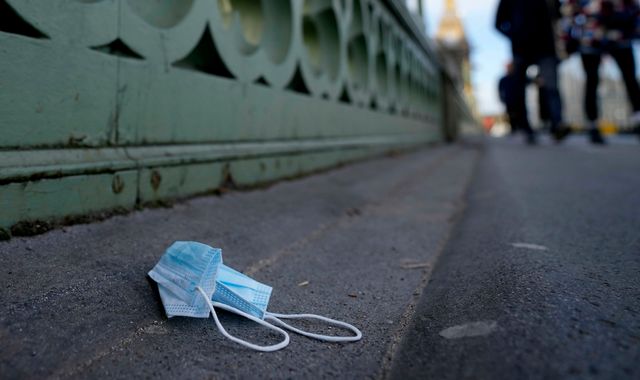 The number of new Omicron cases in the UK has nearly doubled in one day after a further 249 infections of the COVID-19 strain were identified – bringing the total to 817, the Health Security Agency has said.

The latest daily figure comes after a further 131 cases of the Omicron variant were confirmed on Wednesday.

Boris Johnson has said that the variant’s doubling rate could be between two to three days – highlighting just how infectious the new strain is.

It comes as the UK reported more than 50,000 new COVID cases for the fifth time in a week.

Government data also showed a further 148 deaths were reported within 28 days of a positive coronavirus test.

Another 813 COVID patients have been admitted to hospital, meaning there are currently 7,347 being treated, including 890 in ventilation beds.

Johnson says we are learning more about Omicron ‘every day’

Speaking during a Downing Street news conference on Wednesday where he also announced the introduction of Plan B restrictions in England, Mr Johnson warned the coronavirus variant is “growing much faster” than Delta.

The prime minister also said Omicron’s “severity, its exact rate of transmission or indeed the full effectiveness of our vaccines against it” are still unknown.

“We are learning more every day… but since I last spoke to you it has become increasingly clear that Omicron is growing much faster than the previous Delta variant and it’s spreading rapidly all around the world.”

Health Secretary Sajid Javid told Sky News yesterday that based on a doubling rate of two-and-a-half to three days, the UK could hit around one million infections in the community by the end of the December.

Expressing the need for Plan B restrictions, he continued: “We’ve always been clear that should the data change and should it move in the wrong direction and it looked like the NHS might come under unsustainable pressure – remember what that would mean, we wouldn’t be able to get the emergency care not just for COVID but for a car accident, or anything like that – we would act and implement Plan B.”

What is Plan B and why is it being introduced now?

Documents released by a sub-group of the Scientific Advisory Group for Emergencies (SAGE) have suggested that the UK could be set for a wave of infections bigger than in January 2021 due to the Omicron variant’s potential to evade immunity.

The documents say such a rise in cases will significantly impact upon hospitalisation rates despite the vaccine – with admissions from this variant alone potentially reaching 1,000 a day.

However, the documents note that most of the data on the new variant so far is from South Africa, and “South Africa is not the UK, both in epidemiological terms but also socially”.

Further, “it is not yet clear whether and or how Omicron escapes from natural immunity and or vaccine-induced immunity and which of these is the likely main driver of its apparent fitness advantage”.

People in England will be legally required to wear face masks in “most indoor public places” from 10 December, while COVID passes, proving full vaccination or a negative test, will be compulsory at certain venues or events from 15 December under the government’s Plan B set of restrictions.

From Monday 13 December, those who can are advised to work from home.