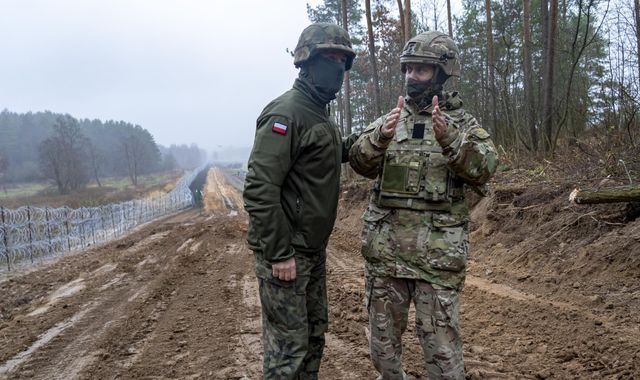 The UK will send 140 soldiers to Poland and a small military team to Lithuania to help both countries deal with a migrant crisis on their respective borders with Belarus, a close ally of Russia.

The move comes at a time of heightened East-West tensions, not just over migrants coming from Belarus, but also over fears of another Russian invasion of neighbouring Ukraine.

It means any new troop deployments into the region by the UK will be watched keenly by Moscow.

Defence Secretary Ben Wallace said the group of military engineers bound for Poland would be providing “non-combat support” from now until April.

Their job will be to help Polish forces strengthen their border with Belarus by building barriers such as fences and repairing roads that lead to the border.

“Our commitment to European security is unwavering and we will always offer support to our allies,” Mr Wallace said in a statement.

The troops will be from 32 Engineer Regiment, the Royal Engineers.

The UK already has 150 troops based in Poland as part of a 1,000-strong, US-led battlegroup.

The so-called Enhanced Forward Presence (EFP) is one of four such battlegroups, including in Estonia, Latvia and Lithuania, which was set up by the NATO alliance to deter Russian aggression in the wake of Russia’s annexation of Crimea in 2014.

In addition, it was revealed that a military reconnaissance team has deployed to Lithuania to explore whether the UK can provide similar support to Lithuanian forces.