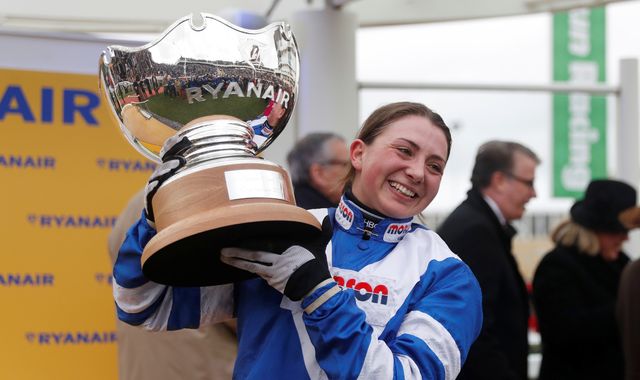 The panel found Frost to be “truthful, careful and compelling”.

Panel chair Brian Barker said “a course of deliberate conduct over a significant time has been revealed”, including “distasteful targeting to deliberate harassment both on and off the course, including occasional cases of dangerous bullying”.

Frost is one of the UK’s most successful female jockeys and made a series of allegations against Dunne accusing him of sexually inappropriate, misogynistic and bullying behaviour in a dispute that went back to 2017.

Dunne was accused of parading naked in front of her after getting out of a sauna at one racecourse.

“I remember him opening his towel up and shaking himself, thinking it was funny,” Frost said.

After the two jockeys had raced against each other at Stratford in July 2020 Dunne was alleged to have said to Frost: “You’re a f***ing whore. You’re a dangerous c***. If you ever do that to me again, I’ll f***ing murder you.”

In racing “murder” can mean cutting up another rider during a race.

At the two-week long hearing at the British Horseracing Authority (BHA) in London, Dunne, 35, accepted that he had verbally abused Frost but rejected using such strong language.

He said of another incident at Southwell Racecourse: “I may have had a bit of road rage.”

He was also accused of threatening to put her “through a wing (of a fence)” in future races.

Dunne said: “It’s a common thing that’s said in the weighing room. Never once have I seen someone go through with it. It’s just a matter of speech… it wasn’t a threat… it was a figure of speech.

“I apologise if Ms Frost felt threatened. That was not the case.”

When she gave evidence, 26-year-old Frost broke down in tears as she explained that the culture within racing makes it very hard to challenge bullying behaviour.

She said that she had been frozen out by some within the sport after making her allegations.

Three male weighing-room valets refused to work with Frost at Fontwell Park earlier this week after they gave evidence in the case.

After the race Frost said to Sky Sports Racing: “It [the crowd] was overwhelming. I really wanted to take in everybody’s confidence and respect. They were all buzzed. That’s the sport and the way they can get behind you like that.

“I’ll stick to me and I won’t change it and I’ll just try and sit tight and keep kicking.”

In his evidence Dunne complained of Frost’s style of riding.

“She is very talented,” he said. “But on occasions she rides irresponsibly and when she does, she causes risks and danger to other jockeys.

“That is not just my view, it is widely held by other jockeys.”

On Thursday the BHA disciplinary panel found Dunne guilty of four charges of conduct prejudicial to the integrity, proper conduct and good reputation of horse racing.

The panel will now consider the penalty faced by Dunne, who could face a ban of up to three years. More details to be announced at 2pm.

The case has prompted a big debate within racing about how female jockeys are treated in the sport, the weighing room culture and the sub-standard facilities for male and female riders at some racecourses.