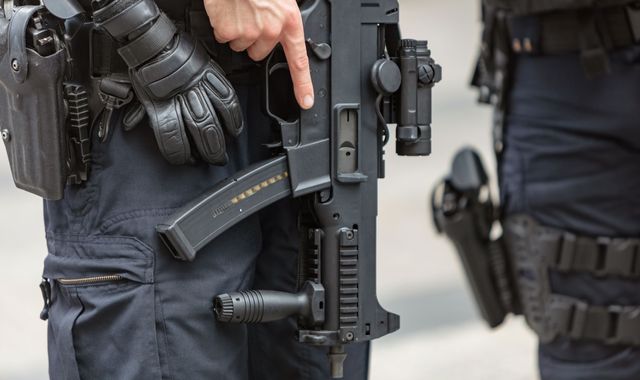 Seven “late-stage” terror attacks have been disrupted by police since the start of the pandemic – and the public is being warned to be “vigilant” over Christmas.

In the last four years, a total of 32 terrorism plots have been foiled, Counter Terrorism Policing (CTP) said.

The latest figures come as senior police officers warned the public to “not let their guard slip during the festive period”.

‘Wave of terrorism in Europe moving towards the UK’, ex-counter terror chief warns

Since March 2017, 18 attacks related to Islamist extremism have been disrupted, 12 linked to right-wing extremism and two to left-wing, anarchist or “single-issue terrorism”.

Senior national coordinator for CTP, Deputy Assistant Commissioner Dean Haydon, has said the public would be “well aware of the fact that the UK has suffered two terror attacks in quick succession, with the national threat level raising to severe – meaning an attack is highly likely”.

He added: “All of this combines to paint a picture of a sustained and high tempo threat, which our world-class police, security, and intelligence services are doing everything in their power to combat,” he added.

Mr Haydon explained that people “need to be vigilant” and “alert” – and co-operation between the police and the public is “vital”.

“As we approach the festive period, we need the public to help play their part in protecting the UK,” Mr Haydon said.

He urged people to trust their instincts and contact police over any suspicious activity.

Home Office data covering the 12 months to 30 September shows that the number of terror-related arrests across all age groups fell, apart from in the under-18s category.

A total of 25 children were detained over terror crimes during the 12 months to 30 September – an increase of eight from the previous year.

They accounted for 13% of all terror-related arrests.

“While this was the highest proportion seen in an annual period, it was largely a result of falls in arrests of those in older age groups,” the Home Office report said.

Mr Haydon expressed concern that children were “becoming an increasing proportion of our arrests”, in light of the figures.

He added: “But it doesn’t have to be this way. Ideally, we would identify when a young person is being led down the path towards terrorism activity and use the Prevent programme to try and put them on a different path.”

He urged parents and other relatives to seek support if they feared a loved one might be following a “dangerous path towards extremism”.

Earlier this year, the boss of MI5 Ken McCallum revealed that agents were investigating teenagers as young as 13.