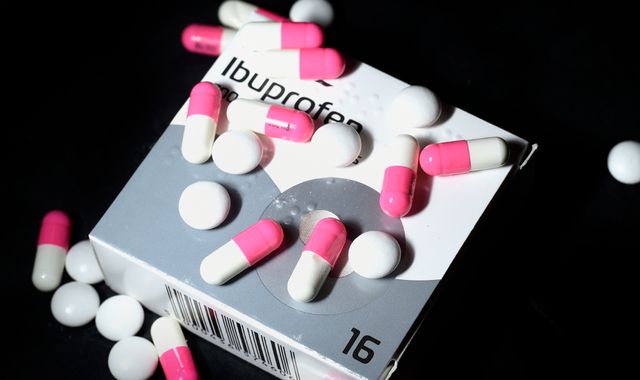 Painkillers ibuprofen and paracetamol are among the list of items that are hardest to find in stores – as the Christmas party season gets into full swing.

Weekly figures compiled by the Office for National Statistics (ONS) showed there was no or low availability of ibuprofen in 18% of locations.

For paracetamol the figure was around 16%, according to the data compiled at 131 UK locations between 3 and 6 December.

Both painkillers had shown similar levels of poor availability in the previous week’s data though ibuprofen now tops the list after a shortage of crisps – previously the hardest to find – eased.

Frozen turkey was also high up on the chart – with low or no availability at 18% of shops checked.

At the other end of the list, beer remained in plentiful supply with high availability in 69% of stores.

The ONS figures, using research by data company Kantar, has been charting the availability of selected products on shelves over recent weeks at a time when supply problems have become an issue for businesses across the economy.

Convenience store chain McColls, which has been badly affected by product shortages, said this week that it was seeing early signs of recovery but the problem remained a major constraint.

Logistics firms recently told MPs that consumers could expect a scaled-back Christmas as retailers pare back some product ranges in order to focus on getting seasonal essentials on to shelves as they battle issues such as HGV driver shortages.

Among the items recorded by the ONS as being hard to find have been crisps.

In November, the data showed they were in short supply in almost one in three shops – attributed to production difficulties at manufacturer Walkers.

The crisps crunch has eased since then though the latest data still shows there was low or no availability of multipacks in about 17% of locations.

Share
Facebook
Twitter
Pinterest
WhatsApp
Previous articleNight Tube strike: Disruption expected on London Underground’s Victoria and Central lines this weekend
Next articleCOVID-19: Boris Johnson accused of ‘throwing clubs and bars under the bus to save his own skin’ with Plan B rules