COVID-19: Omicron variant may be ‘milder’ but its infection rate could be ‘devastating’, expert warns 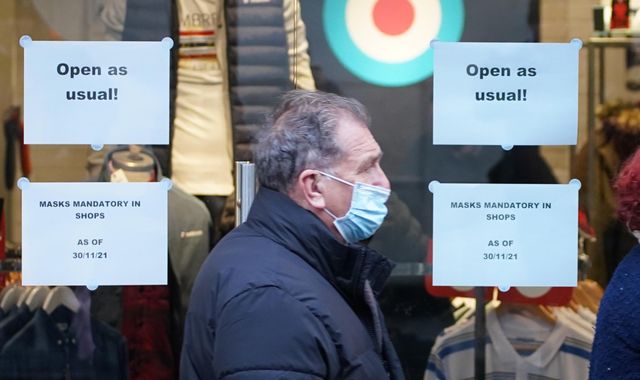 The new Omicron variant of coronavirus appears to be causing “milder” cold-like symptoms, but its reported rapid infection rate “even in the vaccinated” could still have “devastating” consequences, a top scientist has warned.

Early data has suggested the new variant could result in less severe disease than previous waves.

However, Tim Spector, lead scientist on the Zoe COVID Study, warned against complacency, saying, “this is not a reason to be relaxed about Omicron”.

The scientist, who is professor of genetic epidemiology at King’s College London and co-founder of the Zoe app that tracks the spread of COVID, said: “Even with Omicron appearing to be more transmissible than Delta, early signs, including new reports from Zoe users, show that it is breaking through in vaccinated people, but it’s causing milder cold-like symptoms.

“However, this is not a reason to be relaxed about Omicron.

“COVID is unpredictable and, even if most only feel like they’ve got a cold, there are far more long-term risks than a cold carries.

“If numbers skyrocket, it doesn’t matter if the percentage of people being hospitalised or dying remain low – it’s about volume, not percentages.

“The higher rate of transmission even in the vaccinated could have devastating consequences, and hundreds of people continue to die every week as we head into our second Christmas of this pandemic.”

The Zoe study, whose incidence figures are based on reports from around 650,000 weekly contributors, has introduced a new feature into the app that allows people to share their Omicron experiences and symptoms.

According to the study, there are currently 83,658 new daily symptomatic cases of COVID-19 in the UK on average, based on test data from up to five days ago.

This represents an increase of 4% from 80,483 new daily cases last week.

The study estimates that, in the vaccinated population (at least two doses), there are currently 25,411 new daily symptomatic cases.

The government estimates around 3% of new COVID cases are likely to be Omicron.

Prof Spector welcomed the government’s decision to move to its Plan B to tackle the spread of the Omicron variant, but added it is “too little too late” and “many will suffer hardships this Christmas as a result”.

“Unless we see major behavioural change as a result, I expect that COVID rates will climb higher than ever in 2022,” he said.

Earlier on Thursday, amid a backlash from some Tory MPs and businesses, the health secretary defended the shift to Plan B, saying it is the only way to avoid having to impose tougher measures later.

Sajid Javid said Plan B would help “buy time” to understand what the new variant is capable of and bolster the booster vaccine rollout.

With a doubling rate of two-and-a-half to three days, he told Sky News: “It would mean, at that rate, by the end of this month we could hit about one million infections in the community throughout the UK.

“We’ve always been clear that should the data change and should it move in the wrong direction and it looked like the NHS might come under unsustainable pressure – remember what that would mean, we wouldn’t be able to get the emergency care not just for COVID but for a car accident, or anything like that – we would act and implement Plan B.

“I don’t enjoy doing that, no one does – it is a very difficult thing for many people, asking them to work from home or wearing face masks and things, it is a real impact on our liberties.

“But I hope that people will understand that by taking decisive action now, we can potentially avoid action later.”