COVID-19: Omicron variant ‘as bad news as you can possibly get’ for Christmas, leading scientist says 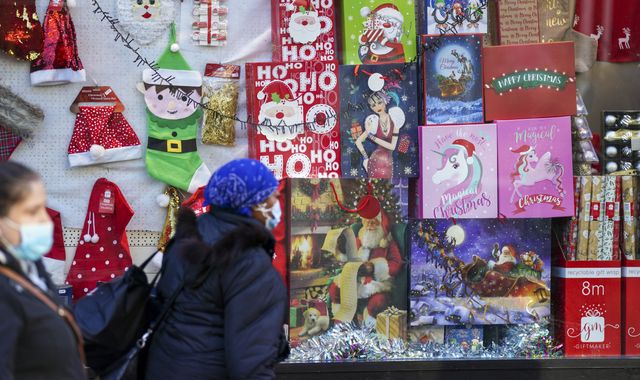 The spread of the Omicron variant is “as bad news as you can possibly get” ahead of Christmas, one of the UK’s leading epidemiologists has said.

Professor John Edmunds, a member of SPI-B, an independent group that advises SAGE on behavioural science, said the UK could have a significant number of cases by the time the festive period begins in earnest.

Speaking at a webinar hosted by the Royal Society of Medicine on Thursday, Prof Edmunds said he expected the new variant would cause a significant number of cases, hospitalisations and deaths over the next two months.

He also rejected the idea that the spread of Omicron could end up being a “Christmas gift” if it turned out to cause a milder form of disease.

“This is as bad news as you can possibly get, quite frankly,” he said.

Yet Prof Edmunds added that he remained positive that vaccines will still provide some level of protection, especially when it comes to boosters.

Almost 22 million booster or third doses have now been administered in the UK, with three shots of the Pfizer jab specifically having been found to “neutralise” Omicron.

The government is hoping that the introduction of Plan B measures in England will help buy time for the booster programme to reach millions more people without the NHS being completely overwhelmed.

The UK Health Security Agency announced on Thursday that the number of new Omicron cases reported had nearly doubled in one day, with a further 249 infections compared to 131 cases on Wednesday.

This has brought the total number of identified Omicron cases in the UK to 817.

It comes after SPI-M-O, a pandemic modelling group, suggested “very stringent” restrictions might be needed beyond Plan B as forecasting shows a potential for a peak of infections that could be even higher than January 2021.

This could see upwards of 1,000 hospitalisations a day, the group says.

Documents released by SPI-M-O say: “If Omicron in the UK combines increased transmissibility and immune escape, irrespective of severity, it is highly likely that very stringent measures would be required to… control growth and keep R (the reproduction number) below 1.”

The R number represents the average number of people that an infected person would pass the virus on to.

The UK’s R number has hovered around 1 for some time, which is why daily cases were relatively flat at around 40,000 over recent weeks.

Even if Omicron’s growth is at the “lower end” of projections, SPI-M-O warns that “many scenarios see hospitalisations close to or going beyond previous peak levels, if there is no reduction in transmission”.

However, it says it remains unclear whether and how Omicron escapes vaccine protection or natural immunity, which along with its increased transmissibility is the biggest concern for scientists and politicians right now.

Do we need to worry about Omicron if it causes less severe disease?