COVID-19: How healthy is the NHS as Omicron spreads? 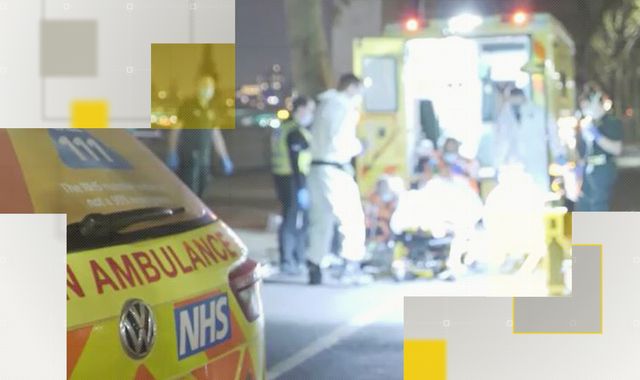 As the country prepares for another potential COVID surge amid spreading Omicron cases, the condition of the health service itself is struggling.

Pressures in one part of the NHS cause a knock-on effect at the next stage down.

We’ll go through the health service to see where the strains are and what that means for the people that need it.

Sky News will be continuing to track the health of the NHS throughout the winter, and the charts in this page will be updated automatically each time new data is released.

But despite the lower numbers of people seeking emergency care, people are having to wait longer than ever for treatment.

Nearly two in five people had to wait more than four hours to be seen in A&E, a record high – ten percentage points higher than in November 2019.

And more than 120,000 people – nearly one in three people who were admitted to hospital via major A&Es – were waiting for more than four hours even after A&E staff had seen them and decided that they needed to be admitted.

That figure is often referred to as a “trolley-wait”.

November was also the first month on record where more than 10,000 people had trolley-waits of more than half a day.

Fewer patients were waiting more than 12 hours in the entire eight years from August 2010 to July 2018 put together than in November 2021 alone.

Tim Gardner, a senior policy fellow at the Health Foundation, says trolley-waits are one of the best indicators of strain across the rest of the health service.

“If patients are stuck on trolleys in corridors because you can’t get them away from A&E that’s because there aren’t enough staff to deal with them or there are too many beds being occupied,” he said.

“There’s not enough slack in the system. Hospitals are bursting at the seams.”

Other NHS figures released today show that 1 in 10 hospital beds are taken by people who don’t actually need hospital care, but can’t be discharged yet due to strains on social care and support in the community.

Chris Hopson, chief executive of NHS Providers, said: “It is striking how many NHS trusts are now saying they are diverting NHS staff and financial resource to support social care colleagues; such is the scale of pressure they are facing.”

Dr Katherine Henderson, president of the Royal College of Emergency Medicine, added that “the need for better availability of social care has never been more apparent.”

The number of calls made to the ambulance service was at a record high for November (1.15m), although this was less than in October. It is the first time that there have been more than a million 999 ambulance calls for six consecutive months.

Like in A&E, the number of incidents the ambulance service dealt with was actually lower than in November 2019, before the pandemic.

But the number of life-threatening incidents was at a record high for this time of year, an indicator that patients are coming to the NHS system in a worse state of health than we’ve been used to.

An incident is each specific accident or case recorded by the ambulance service that requires treatment either face-to-face or with advice over the phone. There can be more than one call about the same incident.

The time people were waiting for the most important callouts was at a record high for this time of year.

In November 2021, people who were in a life-threatening situation when the call came in waited an average of 9 minutes and 10 seconds for an ambulance. It had never been above 8 minutes in any previous November.

Mr Gardner said: “One thing leads to another. If there’s no room in social care settings you run out of beds in hospitals. If you don’t have beds in hospitals A&Es get busy, then because A&Es are busy you end up with ambulances backed up outside, that can’t respond to new events.”

Almost six million people were still waiting for treatment in October this year, 140,000 more than there were in September and yet another record high.

The list has now been growing every month for a year-and-a-half.

More than two million people have been waiting for more than four months, the second highest level on record.

Perhaps most worryingly, given the particularly crucial time-sensitive nature of treatment required, wait-times for cancer patients are also at historic levels.

Nearly one in five people had to wait more than two weeks for their first appointment with a cancer consultant after an urgent referral from a GP. That’s twice as many as in October 2019 and the worst level on record.

More than three in ten people had to wait more than two months for their first treatment after they were referred urgently by a GP. This is also the worst level on record, ten percentage points more than in October 2019 and more than double the official NHS target.

Share
Facebook
Twitter
Pinterest
WhatsApp
Previous articlePublic urged to be vigilant as police reveal they have foiled seven terror attacks since the pandemic began
Next articleCOVID-19: Omicron variant ‘as bad news as you can possibly get’ for Christmas, leading scientist says