‘Our most common call is shootings or stabbings’: A night with London’s Air Ambulance 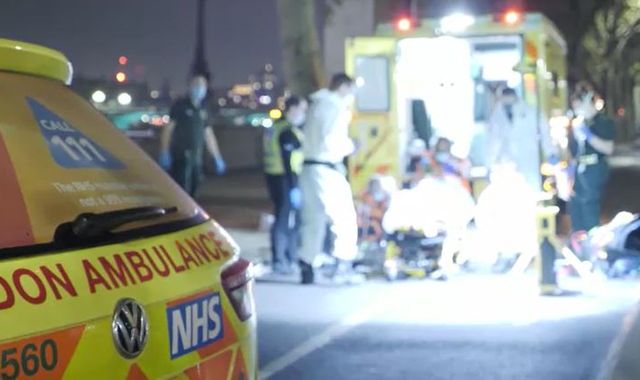 London’s Air Ambulance which specialises in dealing with high trauma cases say their most common call out is knife or gun wounds but that they are constantly developing new techniques to keep people alive.

The service says it will also be able to reach hundreds of additional life-threatening casualties this winter, thanks to funding for just one new vehicle, which will be used at night when the helicopter can’t take off.

We joined Dr John Chatterjee and paramedic Sam Margetts as they raced through London on life-saving missions on 3 December.

The team, called, ‘Medic 3’, gives London’s Air Ambulance two ground teams for the first time in its 32-year history, meaning they can be positioned in both east and west London.

Dr Chatterjee told Sky News: “Roughly about one in a thousand 999 calls will have the need for an advance trauma team and these are patients that either won’t survive to hospital or will do significantly worse without the advanced interventions that we can bring.

“So, what we are designed to do is to bring everything that a trauma room, resuscitation room would have in terms of critical care, anaesthesia, surgery, blood, interventions that can only be provided at hospital and we try to pack all of those into the car and all of those skills into the clinical team that are going to the scene of the accident.”

He added. “Our most common call, sadly in London is shootings or stabbings, what we call penetrating trauma.”

After John and Sam attend the scene of a road accident in west London two new jobs come in almost at once, illustrating exactly why two teams are needed.

There’s a potentially fatal stabbing in East London. One team is despatched from the Royal London hospital in Whitechapel, meanwhile in central London a patient has had a life-threatening fall, so our team heads towards the scene.

A street emergency room is set up on the curb side with bright lights erected as John and Sam take control of the situation, directing the ambulance staff and attempting to save the patient’s life.

The patient is so deeply unconscious that they aren’t managing their own airway.

She needs intubation and John, who is a consultant anaesthetist, is able to administer pre-hospital emergency anaesthesia which is something the road ambulance staff can’t do.

London’s Air Ambulance expert teams can also deliver an at-the-scene blood transfusion; thoracotomy (a surgical procedure which opens up the rib cage cavity to manually massage the heart) and REBOA (where a balloon is fed into the major blood vessels through an injection into the leg), all of which are known to have increased patient survival rates after traumatic injury.

“We have a very set criteria,” explains paramedic Sam Margetts.

“A few things are immediate dispatches, people hit by a train, traumatic amputations, a fall from more than two storeys or if one of our colleagues from the police or ambulance service request us.”

It is the most stressful job I’ve observed because it is the very sharpest end of immediate medical care, and with advances in skills and equipment these medics carry with them high expectations in the most desperate of cases.

They negotiate London’s busy roads with the skill of rally drivers, on arrival they switch to live savers and, on occasion will have the added burden of telling family members the patient wasn’t going to make it.

Afterwards John told me: “You do your job and are there for the patient – you are there for that patient’s family – but you take some of it home with you, because you have to give a little bit of yourself when you talk to these families and you look after these patients.

“Because otherwise you are not doing your job right – and that layers up over time – and I think one of the things about COVID and healthcare in the last few months is everyone’s had those things but no one has had the time to release that pressure.”

It is true of so many healthcare workers right now – and they can only hope with a new COVID variant looming, that this winter doesn’t pile the pressure on even harder.