COVID-19: UK records more than 100 new cases of Omicron variant for second day in a row 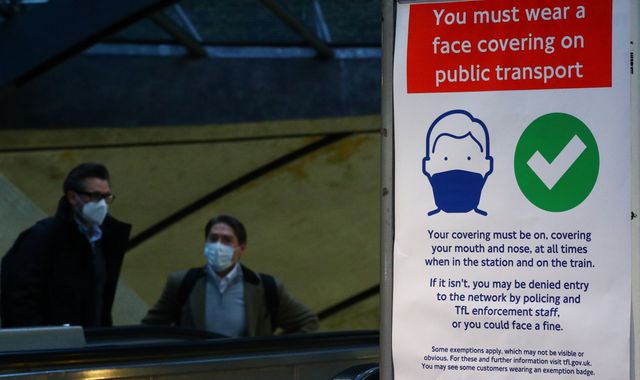 Another 131 cases of the Omicron COVID variant have been recorded across the UK, taking the total to 568.

It marks the second day in a row that more than 100 cases have been reported, after 101 people tested positive for the Omicron coronavirus strain on Wednesday – and it is an increase of around 30% day on day.

The latest data from the UK Health Security Agency shows 115 of the cases were in England, nine in Scotland, and four in Wales, while Northern Ireland has also reported its first three cases of the new variant.

Live COVID-19 updates from the UK and around the world

The UK has also recorded 51,342 new COVID cases in the last 24 hours and a further 161 people have died within 28 days of testing positive for the virus.

PM minded to move to Plan B

The latest data comes as senior government sources revealed Prime Minister Boris Johnson has been minded to move to Plan B restrictions in England as early as this week.

This could see the introduction of COVID vaccine passports and a requirement for millions to work from home.

The PM and his cabinet are said to have received a downbeat assessment from England’s chief medical officer, Professor Chris Whitty, and chief scientific adviser, Sir Patrick Vallance, on the coronavirus situation on Tuesday.

The sources told Sky News that Mr Johnson is worried that if he does not act now, he could regret not taking tougher action in a month’s time.

The government’s Plan B for dealing with winter pressures facing the NHS was first detailed in September.

Ministers said measures would include a strengthening of the government’s messaging, the possible introduction of COVID vaccine passports in some settings, mandatory face masks, and a return to work from home guidance.

Mandatory mask-wearing in shops and on public transport has already been introduced in England following the discovery of the Omicron variant.

Tougher travel restrictions have also been reintroduced, and several southern African countries have been placed on the UK’s red travel list.

However, he has told MPs he has been “repeatedly assured” no such gathering took place.

Speaking in the House of Commons, Mr Johnson said he was “furious” to see the video.

“I understand and share the anger up and down the country at seeing No 10 staff seeming to make light of lockdown measures,” Mr Johnson said at the beginning of PMQs.

Share
Facebook
Twitter
Pinterest
WhatsApp
Previous articleCriminal sneaked acid into courtroom before he drank it and died after ‘inadequate’ security checks, inquest hears
Next articleBoris Johnson apologises over footage of No 10 staff joking about ‘Christmas party’