COVID-19: Omicron cases ‘doubling every 2-3 days’ and expected to be dominant strain with a month 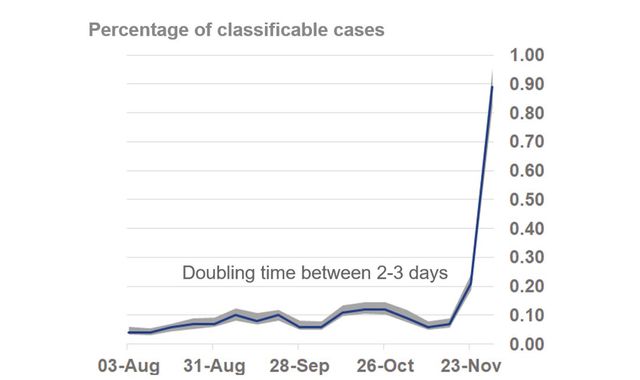 Boris Johnson has warned the Omicron COVID variant is “growing much faster” than Delta and its doubling rate could be between two and three days.

Speaking during a Downing Street news conference, where he also announced the introduction of Plan B restrictions in England, the Prime Minister said Omicron’s “severity, its exact rate of transmission or indeed the full effectiveness of our vaccines against it” are still unknown.

“We are learning more every day, but since I last spoke to you it has become increasingly clear that Omicron is growing much faster than the previous Delta variant and it’s spreading rapidly all around the world.”

A total of 568 cases of the new variant have been confirmed in the UK, but Mr Johnson said “the true number is certain to be much higher”.

“Most worryingly there seems to be evidence that the doubling time of Omicron in the UK could currently be between two and three days,” he said.

The UK Health Security Agency said in a statement: “If the growth rate and doubling time continue at the rate we have seen in the last two weeks, we expect to see at least 50% of COVID-19 cases to be caused by the Omicron variant in the next two to four weeks.”

During the news conference, England’s chief medical officer Chris Whitty presented a slide that showed the rates of Omicron cases in the country.

He explained the percentage of cases with what is called S-gene target failure, which is a marker for Omicron, is “going up incredibly fast now”.

“That is an extraordinarily fast rate and you can therefore get from very small numbers to very large numbers quite quickly.”