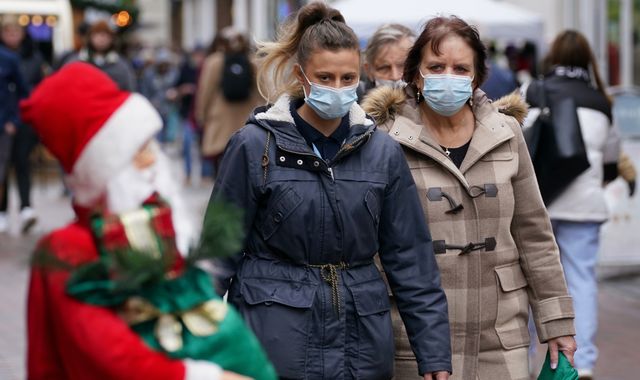 Boris Johnson has toughened coronavirus rules in England amid concern over the increasing spread of the Omicron variant.

Speaking at a Downing Street news conference on Wednesday evening, the prime minister announced the measures in the government’s “Plan B” for dealing with COVID-19 this winter.

What did the PM announce?

The new COVID restrictions being implemented in England include:

• The reintroduction of the work from home order, for those who can, from Monday

• The extension of mandatory face mask wearing to “most public indoor venues”, including theatres and cinemas, from Friday. However, there will be exemptions “where it is not practical”, such as when eating, drinking, exercising or singing

• The NHS COVID pass, commonly referred to as a vaccine passport, will be made mandatory in a week’s time for nightclubs and venues with large crowds. People will be able to use the pass to show either proof of two vaccine doses or a negative lateral flow test result

• The introduction of daily tests for people who are contacts of Omicron cases, instead of a period of isolation.

However, Mr Johnson stressed the new measures were “not a lockdown” and people “should not” cancel Christmas parties or Nativity plays.

The prime minister said it had become “increasingly clear” that Omicron, first detected in South Africa, was “growing much faster” than the previous Delta variant and was “spreading rapidly all around the world”.

He added it was “the proportionate and the responsible thing” to introduce stronger COVID restrictions.

What is Plan B and why is the government introducing restrictions again?

Earlier on Wednesday, it was revealed that another 131 cases of Omicron had been recorded across the UK, taking the total to 568.

It marks the second day in a row that more than 100 cases of the new variant have been reported.

But Mr Johnson warned the “true number” of Omicron cases was “certain to be much higher” with “evidence that the doubling time of Omicron in the UK could currently be between two and three days”.

The prime minister added that, while there were “some limits” to what could be learned from South Africa, the UK was seeing a growth in cases that “mirrors the rapid increases previously seen in South Africa”.

He acknowledged the “remorseless logic of exponential growth” of Omicron in the UK could lead to “a big rise in hospitalisations and therefore, sadly, in deaths”.

The prime minister said the “single biggest thing that every one of us can do” was to get vaccinated and “crucially” to get a booster dose as soon as invited to do so.

“If and indeed as soon as it becomes clear that the boosters are capable of holding this Omicron variant, and we have boosted enough people to do that job, then we will be able to move forward as before,” Mr Johnson added.

In total, the UK has recorded 51,342 new COVID cases in the last 24 hours and a further 161 people have died within 28 days of testing positive for coronavirus.

Mr Johnson made the announcement of fresh COVID measures as he deals with a furious row over an alleged Christmas party in 10 Downing Street last December, when strict coronavirus rules were in place.

Amid the scandal, the prime minister has faced the charge he is implementing stronger COVID measures as a “diversionary tactic”.

But he pushed back at the suggestion that Wednesday’s announcement of new COVID rules was made to “coincide with events in politics”.

“You’ve got to act to protect public health when you’ve got the clear evidence,” Mr Johnson said.

Sir Patrick Vallance, the government’s chief scientific adviser, told the news conference it was “incredibly important” for people to follow the rules.

“Measures work when people follow them and that’s been shown time and time again during this,” he said. “It’s incredibly important everyone follows it, that’s everybody.”

MPs are expected to debate and vote on the new COVID measures on Tuesday, with a review of the new restrictions after three weeks.

Mr Johnson had last month already reintroduced mandatory face mask wearing on public transport and in shops, as well as other settings in England, following the discovery of the Omicron variant.

He has also recently toughened travel restrictions and put a number of African countries on the travel red list.

Share
Facebook
Twitter
Pinterest
WhatsApp
Previous articleCOVID-19: Thousands to take part in trial of ‘game-changing’ coronavirus pill molnupiravir that can be taken at home
Next articleAllegra Stratton: Boris Johnson says he is sorry to lose ‘outstanding’ adviser over No 10 Christmas party video