COVID-19: Boosters will probably be needed for ‘years to come’, says Pfizer 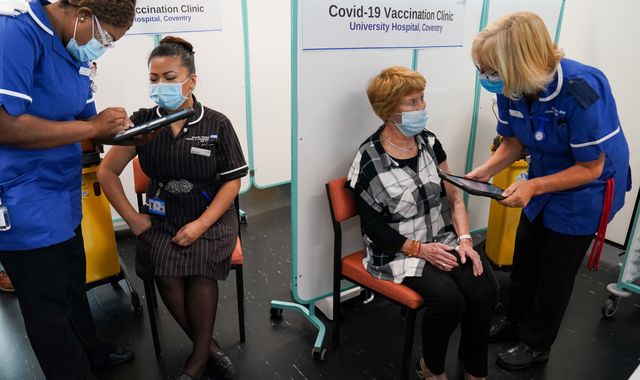 People will probably need coronavirus booster jabs “for a number of years to come”, a Pfizer boss has said.

Ben Osborn, country manager for the pharmaceutical firm in the UK, said it is still unknown whether they will be required every six months or annually.

His remarks come on the anniversary of the first Pfizer jab being given as part of a mass vaccination programme – to Margaret Keenan, a 91-year-old grandmother who has since had a second and third jab.

Mr Osborn said the campaign in the UK has been an “incredible endeavour”, while the Prince of Wales and the Duchess of Cornwall paid tribute to the “remarkable ingenuity and determination” of those involved.

Charles and Camilla confirmed they have both had their boosters, saying: “We urge everyone to get vaccinated and to take up the booster, as we have done ourselves.”

“To all those who have not yet had the vaccine – or are hesitating before getting a booster – we can only urge you to look at the evidence in our intensive care wards and listen to those who work there,” they added.

Mr Osborn said giving booster jabs to all adults is the most important thing that can be done to tackle the Omicron variant right now.

He said Pfizer is ready to develop a new vaccine if needed and would be able to produce doses “at scale”.

“We’re all waiting for various data to come out, not just from Pfizer and BioNTech, but from governments and healthcare systems around the world,” he said.

He said the company is trying to understand “the level of transmission that this new variant gives and whether it will out-compete Delta here in the UK”, its impact on hospitalisations and deaths, and how it is impacted by the vaccine.

More data on those factors will be available in the comings weeks, he said.

Asked for how long people should expect to need boosters, he said: “I think it’s difficult to say in terms of many years because none of us can predict how the virus will evolve over time.

“I think what the science and data are now showing us though is that we are likely to need some level of boosting across our adult population for a number of years to come yet.”

He said Pfizer is also ready to supply jabs to children as young as five – which is already happening in other countries – if the UK medicines regulator approves the company’s application.

Since Britain’s vaccination programme began a year ago, just over 51 million first doses of vaccine have been given, along with more than 46 million second doses and 20 million boosters.

Mr Osborn said: “I don’t think anyone would have imagined that we’ll be in the position that we are today here in the UK, where we’ve got over 80% of our population obviously with two doses, and we’re now well into the booster programme.”