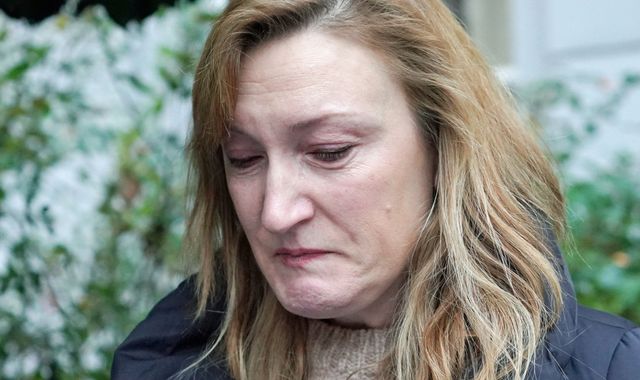 Boris Johnson has said he is “very very sorry” to lose adviser Allegra Stratton after she quit over a video showing her joking about a lockdown Christmas party at Downing Street.

The prime minister was making his first comments about her resignation following her tearful announcement she was leaving a couple of hours earlier.

Speaking at a news conference where he revealed England would be moving to “Plan B” COVID restrictions, Mr Johnson said: “I think Allegra has been an outstanding spokesperson for the government, for COP.

“I wish her all the very best and we will miss her here in government.”

The PM called Ms Stratton – who also worked as his spokesperson for the COP26 climate summit – a “fine colleague” who achieved a “great deal”, but denied he was announcing the new restrictions to divert attention from the saga.

Ms Stratton, a former ITV journalist, gave a tearful resignation statement earlier on Wednesday as she apologised for the video in which she joked about a Christmas party at Downing Street on 18 December last year, when London was under Tier 3 restrictions that meant households could not mix.

Mr Johnson announced at Prime Minister’s Questions that he had asked Cabinet Secretary Simon Case to investigate the alleged party, and also apologised over the video.

He reiterated at the COVID news conference: “All evidence shows people in this building [Downing Street] stayed within the rules, if that’s not the case and people wish to bring allegations of course there will be proper sanctions.”

The Metropolitan Police said after the conference that it would not be investigating the alleged party “in line with our policy not to investigate retrospective breaches of such regulations”.

A spokesman added that the Met had had discussions with the Cabinet Office in relation to the investigation being carried out by Mr Case and that if any evidence was found “it will be passed to the Met for further consideration”.

The new Plan B restrictions are:

• From Friday, masks must be worn in all indoor venues

• From Monday, people must work from home if they are able to

• From Wednesday next week, the NHS COVID pass – proving you are fully vaccinated or have a recent negative test – must be shown to attend nightclubs and events with large crowds

• Daily testing will be introduced instead of isolation for people who come into contact with infected people.

Chief Medical Adviser Professor Chris Whitty told the news conference that early analysis showed the Omicron variant could be doubling every two and a half to three days in the UK.

He added that recent data suggested Omicron had a very high growth rate was spreading rapidly.

And the number of cases with the S-gene drop out characteristic of Omicron have grown from 0.15% of infections during the week of 21 November to 3.3% since 5 December in England.

He warned that a swift rise in cases could lead to a rapid rise in hospitalisations, which could quickly lead to pressure on the NHS.