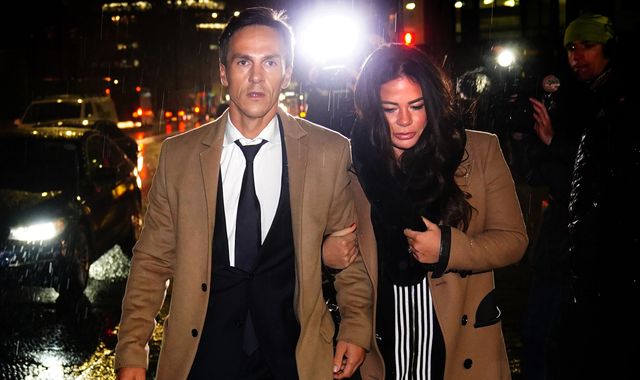 Ryder Cup winner Thorbjorn Olesen has said he was “embarrassed and felt horrible” after being accused of drunkenly groping a woman on a British Airways flight.

The 31-year-old Danish golfer was on board with other professionals, including England’s Ian Poulter and Justin Rose, following the World Golf Championships-FedEx St Jude Invitational in Memphis.

Witnesses have described the “completely bizarre” behaviour of the five-time European Tour winner during the eight-hour flight from Nashville to London.

London’s Aldersgate House Nightingale Court heard Olesen ran around the cabin “like a little boy”, was unable to operate the toilet door and became verbally abusive to cabin crew when challenged.

He is said to have pushed one BA worker, kissed another’s hand before making the sign of the cross, and touched a woman’s breast.

He was eventually led back to his first-class seat – where he cried before falling asleep – but later urinated on another passenger’s seat, the jury has been told.

Olesen, of Chelsea, London, denies sexual assault, assault by beating and being drunk on an aircraft on 29 July 2019.

Giving evidence on Tuesday, he told the jury he would never “consciously” risk his career by committing a crime and has no memory of the flight after taking sleeping pills.

Asked by his barrister, Trevor Burke QC, about the allegations, Olesen said: “I felt absolutely horrible and I was very sorry. I could not believe what they were saying what happened.

“I was just embarrassed and felt horrible.”

Olesen said he had not slept well for weeks, having played several big tournaments, including the Open, and planned to go straight to sleep on the plane.

He said he drank two beers, two glasses of red wine with a sushi platter meal on board a private jet, and one vodka and cranberry juice before boarding the flight.

And he took two melanin tablets, which he regularly uses to combat jet lag, along with two Ambien/Zolpidem pills put into his washbag by his partner, Lauren Zafer.

Olesen said he would “never” have taken the pills had he known they were prescription-only or that side-effects included “sleep walking” and “amnesia”.

He said he “felt fine” as he boarded the plane and was handed a drink, adding: “My last memory is getting a glass of champagne and sitting down in my seat and I think I remember taking off.”

Olesen said he had no recollection of asking for a vodka and cranberry juice, drinking pink champagne from another passenger’s glass, or getting trapped in the toilet.

‘I was very confused’

He also denied remembering being abusive to cabin crew, touching a woman’s breast or urinating on another passenger’s seat.

“The first thing I remember is police coming into my seat,” he said. “I felt a bit all over the place. I was very confused and I think in shock mostly.”

Questioned by prosecutor Max Hardy, Olesen denied he was “in a party mood” when he boarded the flight and said he had “definitely not” taken the pills with alcohol “for fun”.

Olesen said he did not know if any other golfers had any pills on the flight after a witness described a group gathered round him with “brightly coloured” tablets.

Another member of cabin crew described Rose going forward from club class into the first-class cabin after getting a medicine bottle from his bag.

The court was also told a passenger reported they heard mention of Xanax during a conversation between Olesen and Poulter, who has said in a statement he did not give his colleague any pills.