Jussie Smollett: US actor tells court ‘there was no hoax’ as he denies staging racist, anti-gay attack on himself 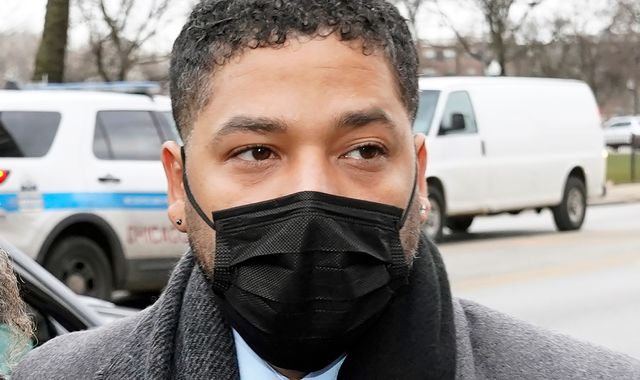 US actor Jussie Smollett has denied setting up a homophobic, racist attack on himself, taking the witness stand for the first time at his trial to tell the jury: "There was no hoax."

The former star of musical drama series Empire is charged with lying to police in Chicago after being accused by two brothers who allegedly carried out the attack of orchestrating the whole thing to get publicity.

Abimbola and Olabingo Osundairo claim Smollett, who is black and gay, gave them a cheque for $3,500 (about £2,600) in January 2019, as well as $100 for supplies, and ordered them to place a noose around his neck and shout anti-gay slurs.

However, testifying for the first time on Monday, the 39-year-old told his trial that he wrote the cheque for nutrition and training advice from Abimbola Osundairo.

"Never," Smollett replied when asked by his defence attorney if the money was payment for any kind of hoax. When asked if he gave the brothers money for supplies, he responded: "Absolutely not."

The actor told the court that Abimbola Osundairo had given him details of a herbal steroid that encourages weight loss but is illegal in the US. Osundairo told him he could get him some "on the low" while he was on a then upcoming trip to Nigeria, Smollett said.

Earlier in the hearing, Osundairo testified that the actor sent him a text message – which the jury saw last week – about talking "on the low", and said that during the conversation he asked him about helping to stage the attack.

Defence lawyers have suggested that the Osundairo brothers accused Smollett of staging the hoax because they did not like him and then saw an opportunity to make money. They have told the court that the actor is "the real victim" in the case.

After the brothers were questioned by police about the alleged attack, they asked Smollett for $1m (about £753,000) each to not testify against him at trial, the defence attorneys have said.

What does Smollett claim happened in January 2019?

The actor says he was walking home when masked men approached him, made racist and homophobic remarks, beat him and looped a noose around his neck before fleeing.

He reported the alleged attack to police in Chicago, who classified it as a hate crime and spent 3,000 staff hours on the investigation, the court has heard.

The actor told officers he was attacked by supporters of then-president Donald Trump – igniting political divisions around the country.

Smollett’s legal team say police rushed to judgement when they brought charges against the actor. They have also suggested a third person may have been involved in the attack.

The charges against Smollett

Prosecutors say the actor had previously received hate mail and was unhappy with the Empire studio’s response, so staged the attack because of this.

Smollett is charged with six counts of felony disorderly conduct for making what prosecutors say was a false police report about the alleged attack – one count for each time he gave a report – to three different officers.

He faces a prison sentence of up to three years, but experts have said he likely would be placed on probation and ordered to perform community service if convicted.

The trial continues, with the actor due to continue giving evidence on Tuesday.