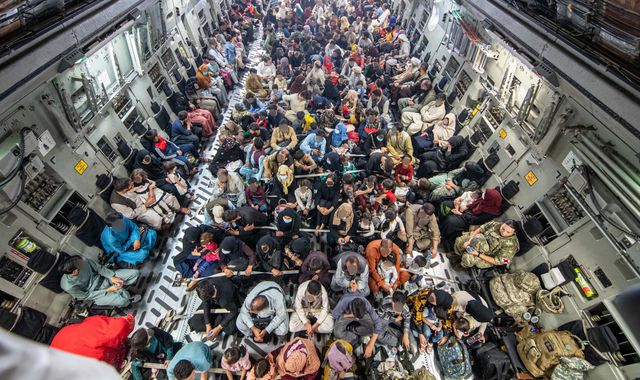 The Foreign Office’s top civil servant has admitted to MPs he was on holiday for nearly all of the UK’s evacuation effort in Afghanistan.

Sir Philip Barton, who earns around £185,000 per year, was on annual leave – during which he spent time both in the UK and abroad – between 9 to 26 August this year.

This included an 11-day period spent on holiday even after Afghanistan’s capital, Kabul, fell to Taliban control on 15 August.

Sir Philip’s admission provides confirmation that he was away from the Foreign Office at the same time former foreign secretary Dominic Raab was also on holiday in August.

Mr Raab, who is now the justice secretary, has previously been heavily criticised for being on holiday during the Afghanistan crisis, including claims he was on a beach in Greece as Kabul fell.

He subsequently returned to London as the UK’s evacuation effort got underway.

Sir Philip, speaking to the House of Commons’ foreign affairs committee on Tuesday, acknowledged it had been a mistake for him to have remained on holiday during the period.

“I have reflected a lot in August on my leave, and if I had my time again I would have come back from my leave earlier than I did,” he said.

But he added he put in place cover arrangements and “stayed in touch with the department all the way through the period”.

Sir Philip’s evidence to MPs also revealed that he remained on annual leave even after his absence was being reported – including by The Times and Daily Telegraph – on 20 August.

At the time, Labour accused “the most senior decision makers in government” of having chosen to have “stayed on the beach” during the crisis.

Sir Philip told the committee there had been “no certainty” that Kabul would be captured by the Taliban during his period on annual leave.

“When I went on leave, including on the ninth, there was no inevitability at that point that Kabul was going to fall in the period that it fell in,” he said.

“The best assessment was that it could take some time. There was no certainty over the timescale.”

The first British troops were deployed to Afghanistan to assist in the evacuation of UK nationals from 15 August – the same day Kabul fell to Taliban control.

They wrapped up their evacuation efforts at the end of August, with the final evacuation flight purely for civilians leaving Kabul on 28 August.

But there has been criticism of the government’s handling of the operation. One Foreign Office whistleblower has given testimony to the committee of a “dysfunctional” and “chaotic” situation.

Speaking after Sir Philip’s appearance, committee chair and Conservative MP Tom Tugendhat said the evidence session had “left the committee concerned about the Foreign Office’s role in the evacuation effort”.

“We have seen the disintegration of a nation British troops laid down their lives to protect,” he added.

“In leaving, many Afghan friends and partners were abandoned. This crisis demanded, and deserved, the full attention of the Foreign Office.

“It seems that junior staff members and soldiers bore most of the burden, having been placed under huge pressure to make life-or-death decisions with insufficient guidance, support or oversight.

The evidence we’ve heard today points to a lack of leadership, urgency and adequate resourcing.

It is deeply painful how badly we have let Afghanistan down.”