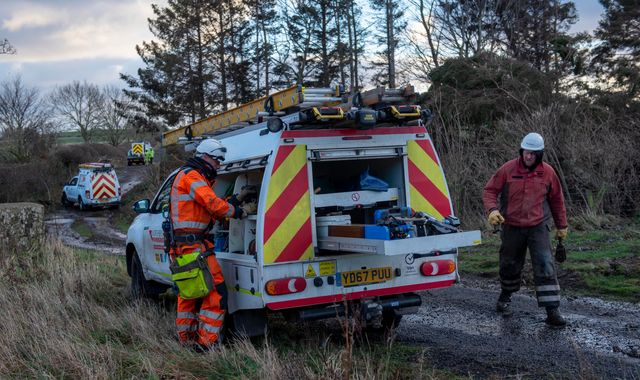 The head of a select committee has reacted with incredulity after an energy boss blamed the way the wind blew for exacerbating problems caused by a devastating storm that cut off supplies to parts of the UK.

Paul McGimpsey, director of regulation at the Energy Networks Association (ENA), told MPs on the business energy and industrial strategy select committee that Storm Arwen “has caused particular issues and the wind direction was one of those”.

Labour MP Darren Jones, chair of the committee, said the networks “ought to be prepared for wind coming in multiple directions” and suggested not enough had been spent on resilience after previous devastating storms.

Thousands of homes in northeast England are still without power 10 days after Arwen struck and are now bracing themselves for a fresh battering from Storm Barra.

Energy secretary Kwasi Kwarteng has described the situation as “unacceptable” while Labour has said it would have been taken more seriously if it had happened in the south.

Mr McGimpsey of the ENA – which represents network operators in the UK and Ireland – told MPs at Tuesday’s select committee hearing that there were “further lessons to be learned”.

He added that “our communications with customers have perhaps not been what they could have been during this event and certainly that’s going to be a key part of the review in coming weeks”.

But Mr Jones told him: “We can’t just keep saying every time this happens ‘lessons will be learned and we’ll do a review’.”

He asked what had been done to improve resilience since last time.

Mr McGimpsey replied that over the last five years £730m had been spent on resilience across the networks “focusing on flood defences, cutting down trees etc”.

He added: “One of the particular issues we have faced with this storm which has been different to what we faced in the past – the wind direction coming from the north east.

“It is not prevailing winds that you would expect from the south and as such in some, many occasions, trees would fall differently onto the lines.”

Storm Arwen: Far too little has happened for powerless homes across the North

Mr Jones said: “Can I just check that I’m hearing this right?

“We planned for resilience work on the basis that the wind would only come in a certain direction?”

Mr McGimpsey said: “No, I’m not saying that.

“I’m just saying that this storm has caused particular issues and the wind direction was one of those.

“So considerable work has been done on the network to reinforce, upgrade – but there were particulars of this storm which did cause issues which are causing the problems that we can only too well see.”

Mr Jones responded: “It does seem to me that we ought to be prepared for wind coming in multiple directions and £730m over that number of years doesn’t sound like a lot of investment from my perspective.”

Share
Facebook
Twitter
Pinterest
WhatsApp
Previous articleCOVID-19: Previous infection and vaccination combine for best protection against variants
Next articleBilly Connolly on dealing with Parkinson’s disease: Comedian says he has learnt to ‘hypnotise’ his hand when it shakes