COVID-19: Pre-departure tests now required of arrivals in the UK to slow spread of Omicron 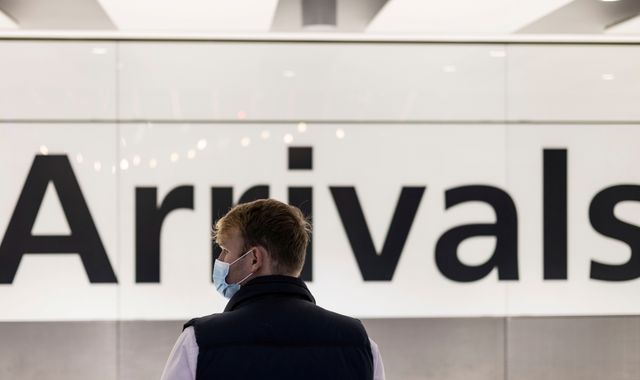 People arriving in the UK from overseas now have to take a COVID-19 test before they travel, under new rules designed to slow the spread of the Omicron variant.

The changes, which came into effect at 4am on Tuesday, will mean:

• Anyone testing positive will not be allowed to travel

• The government’s website says that if a person’s journey to England is a multi-leg journey, then the test must be taken in the two days before the start of the first leg

• Scotland and Wales have said they will implement similar measures

• Hotel quarantine will remain for those who have been in a red list country within 10 days of their departure: Angola, Botswana, Eswatini, Lesotho, Malawi, Mozambique, Namibia, Nigeria, South Africa, Zambia, Zimbabwe

It comes after Health Secretary Sajid Javid admitted that the new variant is now spreading within the community, rather than just being linked to returning travellers.

He said on Monday that some of the UK’s 336 confirmed Omicron cases were not connected to travel, and has insisted the travel measures are temporary.

‘The industry will not survive if there are no sales’

The travel industry has reacted with anger to the new testing rules and the earlier additions to the red list.

“Since the announcement of last weekend, nobody is booking anything in the near term. In September, in October, half the sales were for this winter season.

“So it’s a very significant change and ABTA is all for the health and safety of consumers, but only if government finally recognised the industry for the first time and support it through this series of changes.”

All you need to know about new travel rules

It is not yet know how the Omicron variant differs from Delta, but some early indications from the UK Health Security Agency are that the window between infection and infectiousness may be shorter.

Mr Javid has said that none of the UK’s Omicron cases have thus far resulted in hospital admission.

Labour leader Sir Keir Starmer called on the government to do “whatever it can” to lower the price of pre-departure tests, saying people are “getting really hammered by prices that can’t be justified”.

Also on Tuesday, EU health ministers will discuss whether to adjust travel restrictions imposed on southern African countries after the Omicron variant was first reported by scientists in South Africa.

They could agree to PCR tests for vaccinated third-country nationals from the region, meaning that some of the travel bans could be lifted within a week, according to Bloomberg.

The UK’s travel restrictions are due to be reviewed on 20 December.