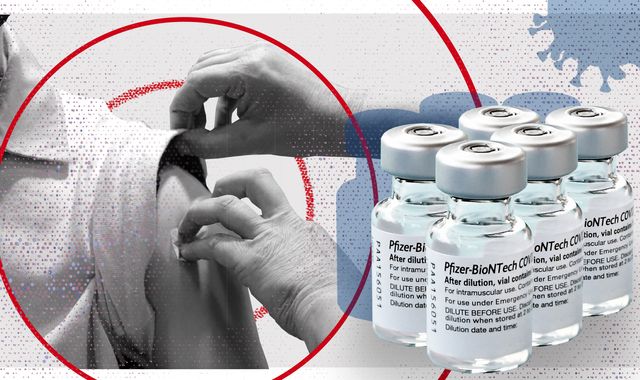 Adults in the UK are being urged to take up the COVID-19 booster vaccine as part of efforts to tackle the spread of the new Omicron variant.

Prime Minister Boris Johnson has said the government is “ramping up capacity” to offer all adults a booster by the end of January.

The latest vaccination data shows that the booster programme is broadly similar in pace compared to the vaccination campaign that began last December.

But booster dose uptake has not been uniform throughout England. There are variations in the vaccination rate depending on where people live.

Data shows that three out of five eligible adults have been given the booster dose in areas with the highest vaccination rate, such as Wyre in Lancashire and Scarborough in North Yorkshire.

The booster dose uptake among those who have had two doses falls to fewer than one in five in the London borough of Tower Hamlets.

Eight out of the 10 least vaccinated areas in England are also in London.

The UK Health Security Agency data also shows that 57 out of 315 areas in England have given a third dose to fewer than two in three eligible adults.

The disparity in booster jab coverage doesn’t appear to be limited to just geographical areas. The uptake remains low among ethnic minority groups as well as most deprived parts of England.

Analysis by researchers behind the OpenSAFELY platform suggests that the proportion of black people aged over 65 who are yet to take up the booster dose is twice that of their white counterparts.

Their analysis also shows that the most deprived areas in England have a higher proportion of people that are yet to take the booster jab – by as much as 10 percentage points – compared to the least deprived parts of the country.

A government report on the disparity of impact from the pandemic last week suggested that poor vaccine coverage is now a major reason for severe disease in some black and Asian groups, despite programmes to improve underwhelming vaccine uptake.

Dr Ben Kasstan, a medical anthropologist at the University of Bristol, welcomed the government’s report but said systemic problems in society are likely to hold back improved vaccination coverage among people from ethnically diverse communities.

He said: “Vaccines are a crucial way to protect people, especially those at higher risk of death due to pre-existing conditions.

“Yet, vaccines are not a solution for the underlying structural issues that led to the disproportionate burden of morbidity and mortality among people from ethnic minority backgrounds.

“As it is looking like COVID-19 booster vaccines will need to become routine, so must the efforts and funding directed to increasing vaccination coverage among minorities be continued.”

Who can get a booster jab and when you can book

Following the emergence of the Omicron variant in the UK, the Joint Committee on Vaccination and Immunisation approved the booster jab to all adults last week.

The agency had previously approved booster doses for those aged 50 and over in mid-September.

Although the UK is still waiting for real-world data on the new variant, scientists believe the booster shots are likely to reduce the risk of severe disease.

“Protection against serious disease is very high after vaccination and I do not anticipate this protection would be significantly lost with the new variant,” said Deborah Dunn-Walters, professor of Immunology at the University of Surrey.