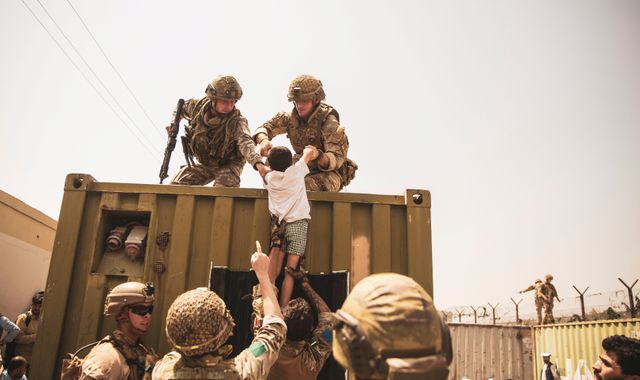 Boris Johnson has dismissed claims that the government prioritised animals over humans during the Afghanistan evacuation as “complete nonsense”.

The prime minister said Operation Pitting, which saw 15,000 Afghans taken out of the country amid the Taliban takeover, was “one of the outstanding military achievements of the last 50 years or more”.

Mr Johnson’s comments come after a whistleblower criticised what he said was a “dysfunctional” and “chaotic” operation led by then-foreign secretary Dominic Raab.

Mr Raab defended himself during an appearance on Sky News earlier, telling Kay Burley the government did “everything we could” to get vulnerable Afghans out of the country.

One of the claims made in written evidence by Raphael Marshall, a desk officer at the Foreign Office, was that the department “received an instruction from the prime minister” to use “considerable capacity” to help animals leave the country that were being cared for by Nowzad, run by Paul “Pen” Farthing.

“There was a direct trade-off between transporting Nowzad’s animals and evacuating British nationals and Afghans evacuees, including Afghans who had served with British soldiers,” he said.

Asked about this, the PM said: “No, that’s complete nonsense.

“The role of the Foreign Office, the role of Border Force, everybody involved in it, the Home Office officials, they did an absolutely outstanding job, processing very difficult, very complex claims, incredibly quickly.

“Of course, sometimes decisions took hours longer than we wanted to. But you have to be careful about how you do it.

“It was still an astonishing thing to get 15,000 people airlifted out of Kabul in pretty harrowing circumstances.

“We continue to have the Afghan Resettlement Scheme to help people to whom we owe obligations and who may be leaving Afghanistan in fear of their lives.”

Mr Farthing also hit back at this criticism, saying in a tweet that “not one single British soldier was used to get me or the @Nowzad #dogs & #cats into #Kabul airport”.

Speaking at a regular Westminster briefing with journalists, the PM’s spokesman defended the government’s approach and also said that Mr Johnson’s wife, Carrie Johnson, did not intervene to organise the rescue of animals.

What else has the whistleblower claimed?

Mr Marshall claimed that only 5% of Afghan nationals who applied under one UK scheme received help, and some were murdered after being left behind.

He alleged that Mr Raab “did not fully understand the situation”, was slow to make a decision on cases and asked that they be reformatted “in a well-presented table” before making a decision.

Mr Raab said he did not recognise the 5% figure and rejected claims that junior officials were left to make life or death decisions on evacuations.

Share
Facebook
Twitter
Pinterest
WhatsApp
Previous articleBilly Connolly on dealing with Parkinson’s disease: Comedian says he has learnt to ‘hypnotise’ his hand when it shakes
Next articleCOVID-19: Pre-departure tests now required of arrivals in the UK to slow spread of Omicron