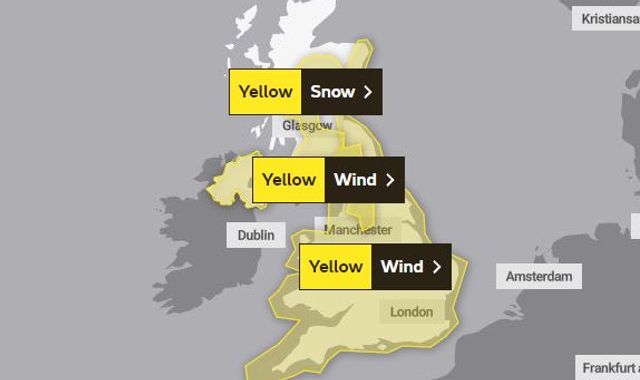 The second major storm of the winter – named Barra by the Irish Met Office – is set to batter the UK on Tuesday.

Weather warnings have been issued for wind and snow as thousands of homes are still without power nine days after Storm Arwen.

Anger among those worst affected by Storm Arwen

Energy Secretary Kwasi Kwarteng said it was “totally unacceptable” that thousands of homes remain without power, after Labour claimed the government would have taken the problem more seriously if the South East had been affected.

Speaking during a visit to Durham, Mr Kwarteng said: “I feel that we’ve engaged with this problem right from the start of the week.

“We have got 99.5% of the people who were affected back on the power supply. For the 0.5%, that’s no solace at all…but it’s wrong to say nothing has been done.”

Mr Kwarteng added that a review will be carried out and if energy firms are found to have failed to invest in infrastructure then “there could be enforcement action”.

‘This wouldn’t happen in London or Surrey’

Storm Barra, which is forecast to bring snow and winds in excess of 70mph on Tuesday and Wednesday, has been named for its potential impact on Ireland.

However fresh warnings for high winds have been issued across the UK for Tuesday and could mean more power supply problems and disruption to transport, the Met Office said.

A warning for snow on the same day covers the North of England and Scotland. Again the Met Office says there is a chance of power outages and a “slight chance” rural communities could be cut off.

Heavy rainfall yesterday meant hundreds of properties that had power restored were again without supply in Northumberland, a local councillor told Sky News.

Latest data showed 3,190 homes were without power across northern England and Scotland on Sunday afternoon, down from 4,025 homes on Sunday morning, according to industry body the Energy Networks Association.

An ‘absence of government leadership’

Ed Miliband, the shadow climate change secretary, said it was “completely outrageous” that thousands of people have been without power for more than a week, after Storm Arwen hit on 26 November.

Boris Johnson expressed concern at the number of homes still without power as he held calls with local leaders and Lt Col Mark Steed, who is coordinating the military involvement in the response.