Storm Arwen: Far too little has happened for powerless homes across the North 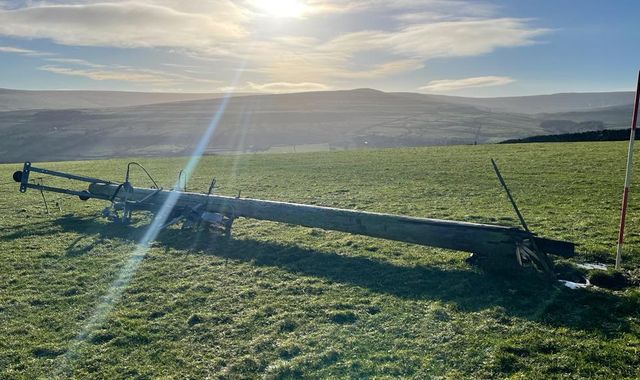 A lot can happen in 10 days, but for homes across the north without power far too little has happened.

As I arrived in one of Northumbria’s small rural villages I met 94-year-old Geoffrey Barkes. He was checking that all his torches still work.

All the latest news on Storm Arwen

The house is bitterly cold, which is actually helpful in one room. The conservatory is where he has been keeping some food chilled but there is only a small pile of supplies on the table.

“We’ve had to throw out a lot of stores because they were not safe to eat. They’d thawed and started to become poisonous really,” says Mr Barkes.

As we are talking his wife Rosemary arrives home.

The two have stayed put in a house with no electricity because they don’t want to stay in an unfamiliar place with unfamiliar beds.

At 94 and 91 years old, comfortable beds are pretty vital. But Mrs Barkes acknowledges there are many difficulties in their current situation – not least the extremely cold temperatures, which could be particularly dangerous for them given their age.

She says that washing herself in icy-cold water has become too horrible a task to face every day.

There is also the threat of Storm Barra. Mr and Mrs Barkes hope the North East won’t face the worst of the storm’s impact but she’s still worried about snow and wind.

On my way through Northumberland, I also met Jonathan Strutt. He had just returned home from a friend’s house about 30 minutes away, where he’d had to go to get internet to connect to a conference call.

He has also been without power for 10 days and his connectivity problems are actually the least of his worries. His 72-year-old mother lives with him and he had to send her to stay with a friend

She is sleeping on their sofa so that she can be in a house with heating. Mr Strutt’s wife and five-year-old son are also staying elsewhere because the house is far too cold for them to live in.

He thinks Northern Powergrid could have dealt with the situation much better.

The uncertainty has been particularly devastating for Ann Foggin who owns a holiday rental company in Great Tosson. She has also been without electricity. Ms Foggin managed to borrow a generator but it hasn’t been enough to keep her business going.

“We have had over £2,000 worth of business gone already, it might be more. We’ve lost cottages, bed and breakfast and Airbnb. We’ve just had to cancel people because there’s no electricity. There’s no heat and they’re not happy.”

There was some good news, finally, for Ms Foggin, Mr Strutt and Mr and Mrs Barkes. Their villages had finally been sent engineers to restore the power. But those operations were still ongoing as the darkness, and even colder temperatures descended.