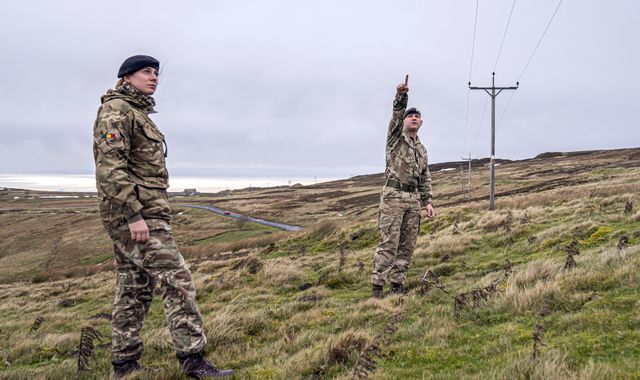 More than 3,000 homes are still without heating and hot water, some 10 days after Storm Arwen affected power supplies – and as a second major storm of the winter is set to batter the UK in the next 24 hours.

In its most recent update, the Energy Networks Association said that 3,190 homes were waiting to be reconnected as of 2pm on Sunday, down from 4,025 homes on Sunday morning.

Most of those affected are in the north east of England.

Scottish and Southern Electricity Networks said power was restored to all 135,000 of its affected customers by Sunday evening.

It comes as yet another storm – named Barra by the Irish Met Office – is expected to hit the UK on Tuesday with gale force winds of 45-50mph which will make it more difficult for those trying to reconnect the remaining homes.

Met Office meteorologist Simon Partridge said the winds would last into Wednesday, with a “mixture of rain and snow in there as well”.

“It’s not going to make working conditions any easier for those out and about,” he added.

The worst of the storm is expected to be in the west of Ireland but yellow warnings for wind are in place across England, Wales, and Northern Ireland on Tuesday, while yellow snow warnings cover southern and western Scotland.

There are currently no weather warnings in place for Monday.

A spokesman for the Energy Networks Association said operators are “working together” to prepare for the storm, adding: “We’re monitoring forecasts regularly, coordinating response plans and preparing to share resources if required.”

Nearly 300 military personnel from the British Army and Royal Marines were deployed to offer support and have been conducting door-to-door checks on vulnerable people in their homes.

Meanwhile, anger has grown about the length of time many homes have been without power since Storm Arwen, with shadow environment secretary Jim McMahon saying it “beggars belief” that restoring power had not been considered a “national priority”.

He told Sky News’ Trevor Phillips on Sunday programme: “I firmly believe had this been a case where 20,000 properties were without power in Surrey or in London, the government would absolutely have treated it with more seriousness.

“For people in County Durham who I spoke to, they felt isolated, they felt angry, and they felt forgotten.”

John Bell, who lives in the village of Elsdon in Northumberland, had his power finally reconnected at the weekend after six days – only for it to be cut off again. He called it a heart in mouth moment.

“We’re quite cross about it,” Mr Bell tells Sky News.

“Because you think, ‘well hang on, these guys work really hard to get the power restored, we’ve got a local councillor who’s pushed things dramatically and has done an absolutely sterling job’. Why wasn’t it an emergency with the army involved far sooner than what it is now?”

Energy Secretary Kwasi Kwarteng said during a visit to Durham: “I feel that we’ve engaged with this problem right from the start of the week.

“We have got 99.5% of the people who were affected back on the power supply.

Meanwhile, the Met Office has told Sky News the relationship between stormy weather and climate change in the UK is still unclear.

Spokesman, Grahame Madge, said: “There is a clear relationship between average temperature increase in the UK and climate change.

“However, the relationship with storminess is less clear.

“A warmer atmosphere holds more moisture, and the signal for increasing rainfall totals, both in terms of annual and seasonal totals as well as volumes for events.

“Whether the UK will see increasing numbers of storms or storms of greater intensity remains less clear.”