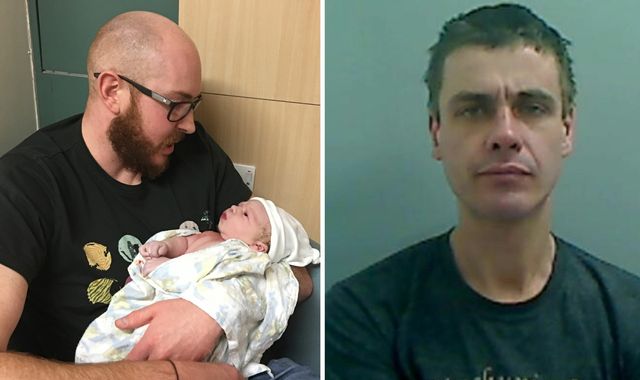 A pedestrian who knifed a motorist to death in front of his four-year-old son faces life behind bars after being convicted of murder.

Alexander Layton, 34, stabbed James Stokoe inside his BMW after he slammed on the brakes to avoid running him over then angrily shouted at him on 15 May 2020.

Layton fled the scene in Thornaby, Teesside, before dumping the weapon – a carving knife which has not been found – then went camping in Great Ayton, North Yorkshire.

He was arrested the following evening in a pizza shop.

Layton denied murder and possessing an offensive weapon and tried to claim self-defence.

But he failed to convince a jury at Teesside Crown Court who convicted him of murder after deliberating for less than three hours.

Layton got off a bus after visiting a foodbank when he crossed a busy main road, forcing Mr Stokoe to make an emergency stop.

Mr Stokoe pulled over to remonstrate with Layton – unaware he was carrying a blade in his rucksack.

He repeatedly stabbed the victim while he was sitting behind the wheel, causing him to bleed to death within minutes.

Mr Stokoe had taken his son to see his grandparents, with the youngster strapped into his car seat as the “shocking incident” unfolded.

Prosecutor Peter Makepeace QC told the court: “Clearly Mr Stokoe must have been shocked, indeed angry, about the near miss that had occurred.

“That might have been compounded by the fact (his son) was in a booster seat in the back of the car.”

An air ambulance was called to the scene but Mr Stokoe died on route to hospital.

His wife, Alex, called to warn him about heavy traffic due to an ongoing incident – unaware he was fighting for his life.

Revealing their heartbreak, Mr Stokoe’s family said in a statement how his loss is “unimaginable”.

“Nothing will ever bring back our beloved James and we have to live with the consequences of what happened for the rest of our lives.

“He was a much-loved husband, father, son and son-in-law and he is dearly missed by all of us.

“James was treasured by so many people with his wonderful, kind and gentle nature and his loss to us all is unimaginable.”

Layton will be sentenced on Thursday.

Judge Howard Crowson warned him: “In a case of this sort of seriousness we need time to reflect.

“The sentence for murder is life in prison.”

“This was a shocking incident which occurred in the presence of James’s young son, which will undoubtedly have had a huge effect on him.

“The death of James has had a traumatic impact on his whole family and my thoughts remain with them at this difficult time.”

Share
Facebook
Twitter
Pinterest
WhatsApp
Previous articleWhat is the Nationality and Borders Bill, why is it so controversial and what do MPs want to change?
Next articleJennifer Lawrence explains how losing a tooth became a ‘personal challenge’ on new film Don’t Look Up