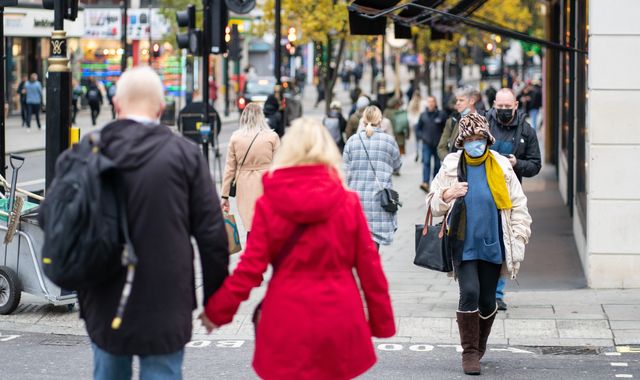 Another 90 cases of the new Omicron COVID variant have been reported in the UK, taking the total to 336.

This compares with a total of 86 new cases reported on Sunday.

The UK Health Security Agency said 64 of the latest cases were in England, 23 in Scotland and three were identified in Wales.

There have been no Omicron cases reported in Northern Ireland so far.

Official data also shows that a further 41 people have died within 28 days of testing positive for COVID, taking the total number of coronavirus-related deaths since the pandemic began to 145,646.

Meanwhile, separate figures published by the Office for National Statistics show there have now been 170,000 deaths registered in the UK where COVID-19 was mentioned on the death certificate.

Concern grows over how harmful Omicron could be

It comes as experts said there is increasing concern that Omicron is spreading more quickly than the Delta variant – and that there are probably more than 1,000 cases in the UK.

Professor Paul Hunter, from the school of medicine at the University of East Anglia, told BBC Breakfast that it is still “uncertain” how it would spread in the UK and how harmful it could be.

He added: “I think the early signs are that it will probably spread quite quickly and probably start outcompeting Delta and become the dominant variant probably within the next weeks or a month or so at least.

“The big remaining question is actually how harmful it is if you do get COVID with this Omicron variant, and that’s the question that we’re struggling to answer at the moment.”

Prof Van-Tam said the “number of mutations present, already on first principle, makes us worry about a possible effect on vaccine effectiveness”.

He made clear there “are far more things we don’t know yet, than things we do know” about the variant, but that he expects more to become clear in two weeks”.

Meanwhile, Professor Willem Hanekom has warned the wave South Africa is in at the moment is much steeper than the curve was for previous waves of the Delta, Beta and Alpha variants.

He told Sky News that “reinfections seem to be more common during this wave so far”, suggesting the virus “may resist some aspects of the immunity that we have to protect ourselves”.

Meanwhile, Boris Johnson has denied scientists’ allegations that introducing travel restrictions to slow the spread of Omicron is like “shutting the stable door after the horse has bolted”.

Visiting police in Merseyside, the prime minister said: “No, I think what we’re doing is responding to the pandemic.

“I don’t think we need to change the overall guidance and advice we’re giving about Omicron in this country.

“We’re still waiting to see exactly how dangerous it is, what sort of effect it has in terms of deaths and hospitalisations.”

It comes as a legal challenge which argues coronavirus hotel quarantine is a “fundamental breach of human rights” has been mounted.

People entering the UK from 10 countries in southern Africa must currently spend 10 full days in a quarantine hotel, at a cost of £2,285 for travellers.

Law firm PGMBM will on Thursday seek permission at the High Court for a judicial review of the Government’s hotel quarantine policy.