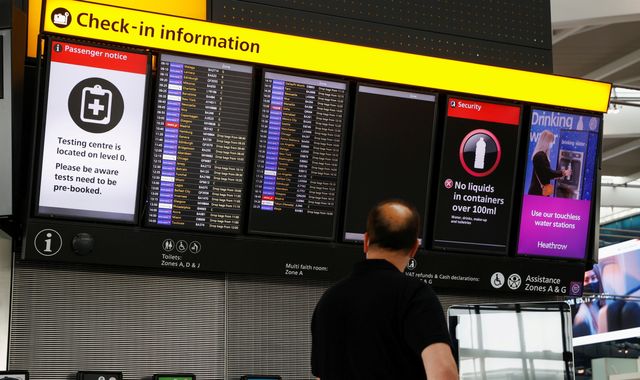 The prime minister has rejected suggestions the government acted too late in reintroducing travel restrictions after the discovery of the Omicron variant of COVID-19.

“We’re still waiting to see exactly how dangerous it is, what sort of effect it has in terms of deaths and hospitalisations,” Boris Johnson said about the variant.

From tomorrow, pre-departure tests for all travellers are being brought back amid the spread of the Omicron variant of COVID-19.

It follows on from the reintroduction of day two PCR tests for anyone who enters the UK from abroad.

Nigeria has also become the latest African country to be added to the travel red list.

But one expert has warned the moves are “a case of shutting the stable door after the horse has bolted”.

Professor Mark Woolhouse, a member of the Scientific Advisory Group for Emergencies which advises the government on its pandemic response, told the BBC’s Andrew Marr that the new rules had come “too late” to make a “material difference”.

But the PM rejected such criticism.

“I think what we’re doing is responding to the pandemic,” he said during a visit to Merseyside.

“We were the first country in the world to take decisive measures to tackle Omicron.

“We put about 10 countries automatically, immediately, on to the red list and we said that anybody coming from any country in the world would have to quarantine for a couple of days.

“We’re now going further and toughening those measures up as we see the spread of Omicron around the world.

“I don’t think we need to change the overall guidance and advice we’re giving about Omicron in this country.

“We’re still waiting to see exactly how dangerous it is, what sort of effect it has in terms of deaths and hospitalisations.”

Labour leader Sir Keir Starmer said the government should have acted “more quickly” and were “behind the curve”, as he called on them to bring the costs of the tests down.

Sir Keir said: “As soon as we saw the scientific evidence saying that (there) should be pre-departure tests, we called on the government to do this last week. The government delayed, as they always do.

“They’ve done it now, that’s a good thing. But the government needs to get ahead instead of being behind.”

“We have to be agile, we have to recognise that all these things are impositions on people’s lives and lifestyles,” he said.

“There are obviously extra costs and they cause difficulty for the travel industry.

“We need to try and smooth that out as much as possible and be proportionate about our response.”

Airline operators have been critical of the decision to bring back pre-departure testing, describing it as a “hammer blow” for an industry that has suffered throughout the pandemic.

Mr Malthouse defended the government’s approach in the wake of Omicron emerging, telling Sky News it is “proportionate and precautionary”.

He said he has “great confidence” scientists will give us a clearer picture in the coming weeks.

“We need a bit of time to make our view of what this virus is capable of,” Mr Malthouse said.