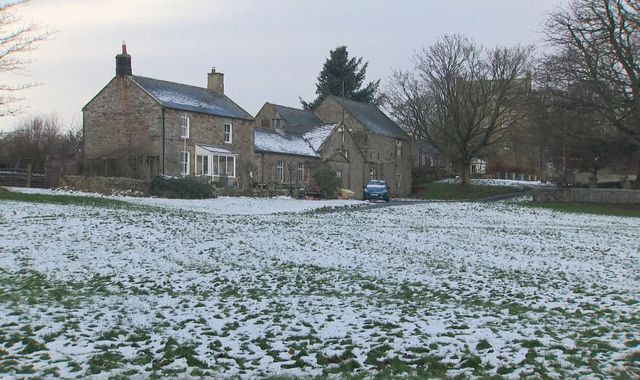 These communities are now well into their second week without power, and 300 miles north of Westminster, there’s a sense of isolation and neglect here.

Many are angry at how long it’s taken politicians to respond to this crisis.

And many are now fearful of a winter with intermittent power.

Thousands still without electricity in the wake of Storm Arwen are now bracing for Storm Barra.

Snowfall overnight has already been a massive setback for this badly hit area of Northumberland, and you can feel people’s frustration and desperation.

John Bell, who lives in the village of Elsdon, had his power finally reconnected after six days – only for it to be cut off again. He called it a heart in mouth moment.

“We’re quite cross about it,” Mr Bell tells Sky News.

“Because you think, ‘well hang on, these guys work really hard to get the power restored, we’ve got a local councillor who’s pushed things dramatically and has done an absolutely sterling job’. Why wasn’t it an emergency with the army involved far sooner than what it is now?”

Snowfall has made an already desperate situation far worse here.

This is the ninth day without power for more than 4,000 homes in the UK. The army is now deployed to check on the vulnerable, many living in remote areas and unable to contact their energy companies.

And it’s taken nine days for a cabinet minister to visit Westminster – the business secretary meeting Northern Powergrid and surveying the storm damage.

Kwasi Kwarteng described the situation as “unacceptable” and said he has “instituted a review into whether companies have invested enough”.

But a review doesn’t help people now – in homes with no heating, no hot water, no electricity.

“We were down to around about the last 120 to 150 properties at the close of play yesterday,” he said. “We had significant rainfall and wind hit again last night, and that pretty much wiped out all of the good work that had been achieved over the last three or four days, and we’re now back up to around 600 properties that are still without power.

“In my view, a major incident should have been called earlier on in the week, and I think that came down to more politics than actual practicalities.”