MOBO Awards: See the full list of winners as Tion Wayne and Russ Millions claim song of the year 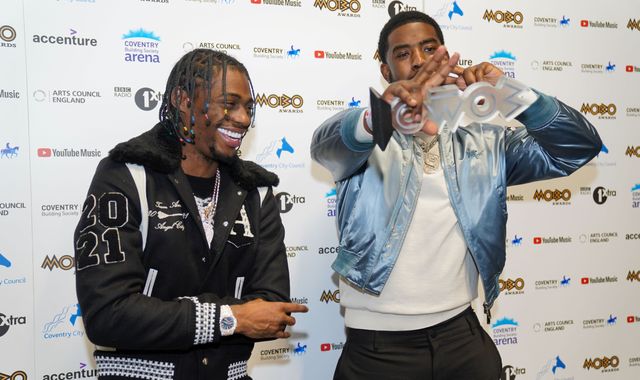 Musicians including Dave, Little Simz, and Ghetts have been honoured at this year’s MOBO Awards.

The ceremony, which showcases the best black music in the UK, Africa, the Caribbean, and beyond, also hailed London rapper Central Cee as the best drill act.

Rapper Dave won album of the year after picking up the most MOBO nominations for his critically-acclaimed second album, We’re All Alone in This Together.

MOBO founder and CEO Kanya King explained the introduction of the new drill category to Sky News: "What’s important is for the MOBOs to be a driver of progress and to really celebrate the music that young people are into.

"Drill is a dominant genre, and we wanted to be able to celebrate the artistry."

Drill has been blamed by authorities for encouraging youth violence, a claim refuted by Big Narstie, who said in 2018 that it is "unfair" that the genre was being linked to stabbings and shootings in the capital.

In the same year, the Metropolitan Police ordered YouTube to remove at least 30 drill videos from its platform, claiming they incited gang violence.

The MOBO Awards 2021 were streamed on YouTube from 8pm on Sunday, with Little Mix’s Leigh-Anne Pinnock and comedian Munya Chawawa hosting this year’s show.

Video of the year – Lagga – M1llionz