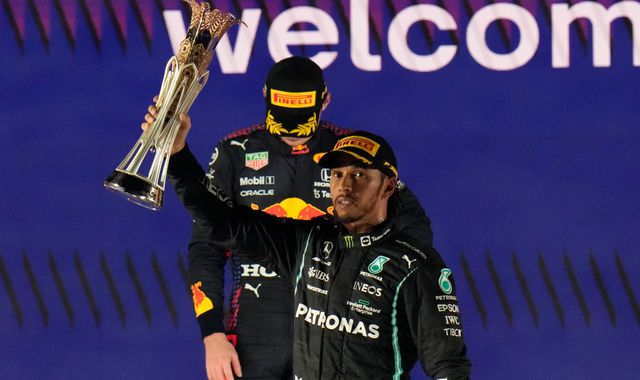 Lewis Hamilton has kept his hopes of a record eighth Formula One title alive by winning the Saudi Arabian Grand Prix, taking the championship battle to the final race of the season.

Hamilton is currently tied with German legend Michael Schumacher for the most world championships, but a win next weekend could see him beat the record to become the eight-time titleholder.

Sunday’s race was packed full of action, with two red flags and a controversial collision between Verstappen and Hamilton on lap 37.

The pair enter the final race on 369.5 points each, with Verstappen ahead on nine race wins to Hamilton’s eight, and will compete to see who will be the next world champion.

This is the first time in 47 years that that two championship contenders have entered the final race with tied points.

The battle between the Mercedes and Red Bull drivers has been heated all season.

During the Saudi race, a frustrated Hamilton could be heard saying: “This guy is f****** crazy, man,” over his radio as Verstappen slowed down, allowing the Briton to run into the back of him.

After the race, when asked if he feared Verstappen’s driving may take him out, he added: “I definitely feel that there were scenarios where that was the case.”

“This isn’t the first time I have had to avoid collisions and that is how I felt in the moment,” Hamilton said.

“Sometimes you say things in the heat of the moment and go back and re-watch things and maybe feel differently.

“In the moment that is how it felt, but I just try to recompose myself, chase him down and keep fighting.”

Hamilton completed the race whilst sporting a Progress Pride helmet.

The Mercedes driver has used his time in the kingdom to voice his concerns about its LGBT+ laws, as human rights organisations accused Saudi leaders of using the sport to try to distract from such abuses.

“There’s changes that need to be made. For example women’s rights of being able to drive [legally] in 2018, it’s how they are policed. Some of the women are still in prison from driving many, many years ago,” he said.

“So there’s a lot of changes that need to happen and I think our sport needs to do more.”

The pair are not known to hold back on the track and in the event that both are unable to complete the race, Verstappen would be handed the championship as he has taken nine podiums in comparison to Hamilton’s eight.

The final race has now become a winner-takes-all showdown and will likely be as thrilling as the rest of the season.