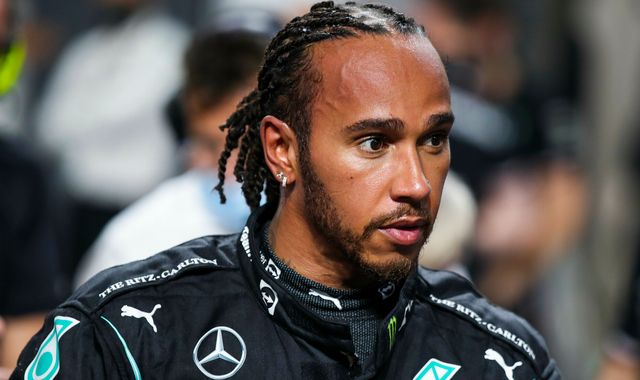 Sir Lewis Hamilton has said he had “nothing to do” with the Mercedes F1 team’s partnership deal with Kingspan – an insulation firm linked to the Grenfell Tower tragedy.

Kingspan’s logo appeared on Sir Lewis’ car for the first time on Saturday as the seven-time world champion completed a qualifying session for the Saudi Arabian grand prix this weekend.

Speaking at a news conference after taking pole position for Sunday’s race, Sir Lewis said the partnership deal had “nothing” to do with him.

He said: “It is not something that I feel I have to speak about publicly… it was news to me when I heard the things that have happened this week and I was very aware and watching closely all the families affected by what happened there.

“We know there has been a huge outcry and an amazing amount of support by people in the community around there.

“It is really nothing to do with me and I know Toto (Mercedes team principal Toto Wolff) is sorting it.

“Unfortunately my name is associated with it because it has been on my car but whether that remains the same, we will see.”

In 2020, he posted a picture with a caption that said: “Today marks three years since the horrific Grenfell Tower fire in London.

“Remembering the 72 souls we lost and their loved ones, and everyone affected by this tragedy.”

On Friday, Mercedes-AMG Petronas F1 team principal Toto Wolff apologised to Grenfell survivors and bereaved relatives, and thanked campaign group Grenfell United for an offer to meet following its condemnation of the deal with Kingspan.

The group had written to Mr Wolff urging him to end the deal.

Responding to them in a letter, Mr Wolff wrote: “The tragedy of the Grenfell Tower fire was beyond imaginable to me, and it should never have happened.

“On behalf of our team, I would sincerely like to apologise to you for the additional hurt that this announcement has caused.

“It was never our intention to do so.”

Mr Wolff said that before concluding the partnership, his team “engaged with Kingspan in depth to understand what role their products played in what happened at Grenfell”.

He said: “Kingspan have stated that they played no role in the design or construction of the cladding system on Grenfell Tower, and that a small percentage of their product was used as a substitute without their knowledge in part of the system which was not compliant with building regulations and was unsafe.”

Meanwhile, Communities Secretary Michael Gove said the government could amend advertising rules on racing cars if Mercedes does not pull the partnership with Kingspan.

An inquiry is examining how Grenfell Tower came to be coated in flammable materials which contributed to the spread of fire which killed 72 people in June 2017.

Kingspan’s K15 insulation was one of the products installed on Grenfell Tower during its refurbishment, although the majority of the insulation used on the west London tower block was made by another company.

The company said in a statement: “Kingspan played no role in the design of the cladding system on Grenfell Tower, where its K15 product constituted approximately 5% of the insulation and was used as a substitute product without Kingspan’s knowledge in a system that was not compliant with the building’s regulations.”

Share
Facebook
Twitter
Pinterest
WhatsApp
Previous articleSir Lewis Hamilton says he had ‘nothing to do’ with Mercedes deal with Grenfell firm
Next articleCOVID-19: Travel rules have changed again because of Omicron – what are they now?